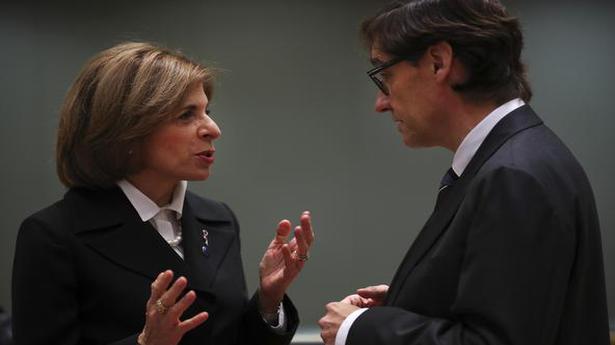 European Union health ministers were holding an emergency meeting on Thursday on how to prevent the COVID-19 virus from further spreading across Europe.

Ministers from the Bloc’s 27 member states gather in Brussels amid the outbreak, which has infected around 60,000 people worldwide. Mike Ryan, the executive director of the World Health Organization’s emergencies programme, will also join the debate via video link.

More people have now died from COVID-19 than during the SARS outbreak, but no death has been reported in Europe so far.

Less than 50 suspected cases have been registered on the continent but the European Union insists that coordinated action is required to keep these figures low.

Janez Lenarcic, the commissioner for crisis management, said before the meeting that the risk of COVID-19 further spreading in Europe remains low, but it may increase.”

According to an EU official who wasn’t authorised to speak publicly before the meeting, discussions will focus on health questions, with issues such as travel bans or restrictions, which are up to individual nations in the Bloc, likely to be avoided.

Many countries have implemented travel restrictions on recent visitors to China, which has more than 99% of the world’s reported infections.

The EU has so far organised the repatriation of around 500 of its citizens who were in China.

Ministers will also discuss how to facilitate the joint purchase of protective equipment by member states in a bid to avoid potential shortages, and how to help third countries with less robust health systems.

Cyclone Bulbul lashed Bangladesh overnight, killing six people and leaving relatives in a desperate search for 36 missing fishermen, though prompt evacuations saved many lives and the worst was over, officials said on Sunday. Some 30 people were injured and around 6,000 homes were partially or fully damaged, authorities said. Five of the six victims […]

Ohio’s Republican governor says he’ll run through a set of proposals to deal with gun violence and mental health just days after nine people died in the latest mass shooting in the U.S. Gov. Mike DeWine says he’ll go into more detail on Tuesday about what he wants do. The governor was thrust into the […]

In what is likely to become a protracted battle with U.S. President Donald Trump, a committee of the U.S House of Representatives has demanded six years of Mr. Trump’s personal and business tax returns from the Internal Revenue Service (IRS). House Ways and Means Committee Chairman (a Democrat), Richard E. Neal, based his request to […]