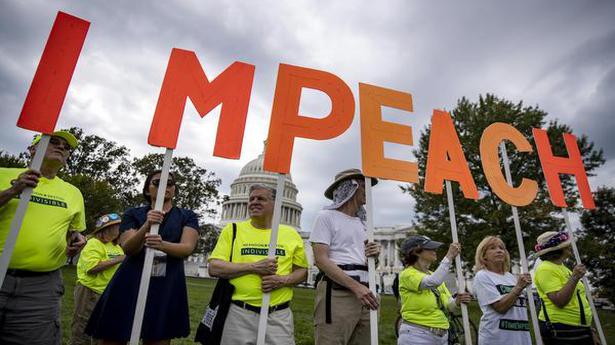 The story so far: Even by the standards of his rambunctious term in office so far, U.S. President Donald Trump has found himself in the cross hairs of a political-existential challenge — the prospect that he might be the fourth American President in history to face impeachment proceedings, after Andrew Johnson in 1868 (violation of the Tenure of Office Act), Richard Nixon in 1974 (Watergate), and Bill Clinton in 1998-99 (high crimes or misdemeanours). Mr. Trump’s troubles mounted after his telephonic conversation/s (on July 25, 2019) with Ukraine President Volodymyr Zelensky, about the former U.S. Vice-President Joe Biden (Mr. Trump’s potential 2020 opponent). These were allegedly done in a bid to influence Mr. Zelensky to investigate the business dealings of Mr. Biden’s son, Hunter Biden (in relation to links to a Ukrainian natural gas company). Subsequently a whistle-blower, believed to be an officer of the Central Intelligence Agency (CIA), filed a formal complaint outlining alleged improprieties that the call entailed, as well as broader hints about potential compromise of national security in the White House. As news of a whistle-blower complaint outlining such alleged improprieties reached the U.S. Congress, pressure began to mount on the White House to release the edited memo — not a full call transcript — of the discussion between Mr. Trump and Mr. Zelensky. In a rare show of bipartisanship, the U.S. Senate voted and passed unanimously earlier this week a resolution calling for the White House to release the whistle-blower complaint. The White House had no choice but to accede, and on Thursday, Capitol Hill had in its possession both the complaint and the edited memo on the call.

What are the specific allegations of wrongdoing?

First, Mr. Trump is said to have “personally ordered” his staff to freeze more than $391-million in military aid to Ukraine, a short while before the incriminating call with Mr. Zelensky. Given that such aid is considered to be essential for Ukraine to purchase Javelin anti-tank missiles potentially for use against Russia-backed rebels, anything that Mr. Trump demanded in return for releasing these monies would imply that his conditions represented an outright quid pro quo involving a questionable use of taxpayer funds. Second, Mr. Trump went on to say, “I would like you to do us a favour though…” and then mentioned two “favours” relating to his personal political interests — not national security. In the view of Democrats on Capitol Hill, this would constitute a betrayal of Mr. Trump’s oath of office. The first favour related to asking Mr. Zelensky to help him “get to the bottom of” the dealings of a prominent U.S. cybersecurity company called CrowdStrike, the firm that the Democratic National Committee (DNC) called in 2016 after discovering a hack of its server leading to email and other data theft. This is widely believed to be based on Mr. Trump’s erroneous belief that there was a “missing server” in CrowdStrike’s possession that held some undefined but incriminating evidence against the Democratic Party.

The second favour related to Mr. Trump’s belief, again not supported by any known facts, that Mr. Biden stopped the prosecution of his son (relating to his role on the board of Burisma Holdings Limited, a Ukrainian gas company. Mr. Trump appears to not attach importance to Ukraine’s (now former) public prosecutor, Yuriy Lutsenko, saying on the record that he had no evidence of wrongdoing by the younger Biden. Third, Trump administration officials may have overreached their authority when they sought to block that complaint from reaching the House of Representatives Intelligence Committee, despite Michael Atkinson, Inspector General of the intelligence community, saying that he considered it a credible matter of “urgent concern” that merited notifying the U.S. Congress.

What do Democrats consider “explosive” in the whistle-blower’s complaint?

The complaint, that some media reports said were authored by a CIA analyst stationed at the White House, not only references Mr. Trump’s telephone call with Mr. Zelensky, but also alleges that Mr. Trump used that phone call to “solicit interference” in the 2020 election, and that the White House then intervened to “lock down” the transcript of the call. Indeed, the whistle-blower added that this was “not the first time” that Trump administration officials placed presidential call transcripts in a separate, classified system that was intended for national security, not political protection. This protocol may also be investigated by Congress.

It was in this backdrop that House Speaker Nancy Pelosi announced an inquiry into impeachment proceedings against Mr. Trump, which is set to begin after she meets with her colleagues next week.

How likely is Mr. Trump to be impeached?

A majority of House members have now said ‘they support an impeachment inquiry into Mr. Trump’. One media report has the figures as 225 being in favour (223 Democrats, 1 Independent and 1 Republican) while 155 are undecided; a response is waited from 54. ‘If the House votes on articles of impeachment, a simple majority, or 218 votes, would be needed to impeach’. The success of the inquiry would depend on whether there is a “smoking gun” to be found, of the kind that brought down President Nixon.

In U.S. history, impeachments have tended to pick up momentum in the House, but a conviction, which is necessary for the impeachment to succeed, has depended on which party controlled the Senate. In this case, the Republican Party’s control of the Upper House might just be the lifeline that rescues the Trump presidency if the inquiry moves forward as planned.

American forces have started pulling out of two bases in Afghanistan, a U.S. official said Tuesday, the day peace talks between Kabul and the Taliban were due to start despite widespread violence and a political crisis. The United States is keen to end its longest-ever conflict, and under the terms of a deal signed in […]

The number of foreign students coming to U.S. colleges and universities continued to fall last year, according to a new report, but the Trump administration says the drop should be blamed on high tuition costs and not students’ concerns over the political atmosphere of the nation. An annual report from the Institute of International Education […]

Brazil, the hardest-hit Latin American country in the coronavirus pandemic, has surpassed 10,000 deaths, according to figures released Saturday by th Source: thehindu.com Related