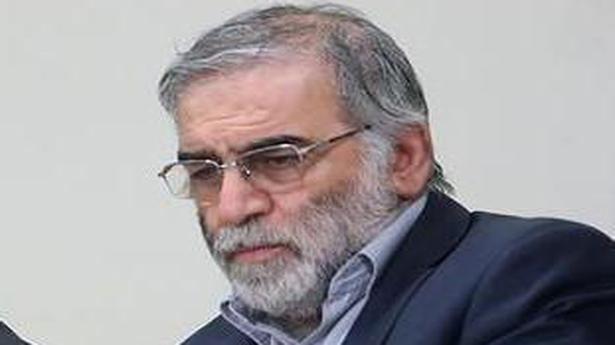 The assassination of Mohsen Fakhrizadeh, a top Iranian nuclear scientist and a brigadier general in the elite Islamic Revolutionary Guard Corps (IRGC), on the outskirts of Tehran on Friday has triggered a new crisis in West Asia.

It is the most high profile killing of an Iranian regime figure since the assassination of General Qassem Soleimani, who commanded the Quds Force of the IRGC, in January this year by the U.S. in Baghdad.

Fakhrizadeh, according to the U.S. and Israel, had overseen Iran’s nuclear weapons programme in the 1990s and early 2000s, and remained a key figure in the country’s nuclear programme and the Defence Ministry. Iranian media reported that gunmen opened fire at Fakhrizadeh’s car while he was driving through Absard, a small town located some 65 km east of Tehran.

The killing comes at a crucial time for Iran. There are hopes that Joe Biden, the next American President, would return to talks, ending months of “maximum pressure”, a policy adopted by the outgoing President Donald Trump, which took both countries to the brink of war after the killing of Soleimani.

Iran started violating the terms of the nuclear deal, called Joint Comprehensive Plan of Action (JCPOA), after President Trump unilaterally pulled the U.S. out of the agreement in May 2018. The loss of Fakhrizadeh, at a time when Iran is taking baby steps to expand its nuclear programme, either as a strategy or as a bargaining chip, is a clear setback to its plans.

Iranian Foreign Minister Javad Zariff has said there are “serious indications” that Israel was involved in the attack. American media have quoted U.S. intelligence sources as saying that the attack was carried out by Israel. In the past 10 years, at least six Iranian scientists [Massoud Ali-Mohammadi, Majid Shahriyari, Fereydoun Abbassi-Davani, Darioush Rezai, Mostafa Ahmadi-Roshan and Fakhrizadeh] were killed in bomb and gun attacks in which Israeli hands were suspected. Israeli Prime Minister Benjamin Netanyahu had called out Fakhrizadeh in a press conference in 2018. “Remember that name, Fakhrizadeh,” he said, when he presented a photograph of the nuclear physicist.

The attack comes weeks after President Trump reportedly sought options to bomb Iran before he leaves office on January 20. He was dissuaded by his aides, according to an NYT report. Later, Mike Pompeo, the U.S. Secretary of State, travelled to Israel and held talks with Mr. Netanyahu.

Mr. Pompeo and the Israeli Prime Minister then flew to Neom, the futuristic megacity being built in Saudi Arabia, and held secret talks with Crown Prince Mohammed bin Salman, in the first direct talks between the top leaders of Israel and the Kingdom. It’s hardly a secret that Israel, Saudi Arabia and the Trump administration would want to stop the Iran nuclear deal being revived, which could lead to the lifting of sanctions on Iran and leave the Islamic Republic stronger. When the leaders met in Neom, there were speculations that something was brewing in West Asia. Then came the attack on Fakhrizadeh.

Iran has threatened to “strike as thunder” in retaliation. There are already protests in the country, asking for revenge. But Iran’s options against Israel appear to be limited, unless Hezbollah, the Lebanese Shia militia-cum-political party, is ready to attack northern Israel from its bases in southern Lebanon.

What Iran can do, which it demonstrated in 2019 after Trump reimposed sanctions, is to target oil tankers in the Strait of Hormuz or oil installations in the Sunni monarchies across the Gulf. But Iran did not opt for an all-out war even after Soleimani was killed. Its response was limited to targeting U.S. bases in Iraq and even that came after enough warnings so that the U.S. could take precautionary measures to protect its soldiers.

Now the question is what would Iran do if it wants to avenge the death of Fakhrizadeh. In recent months, Iran has come under great pressure as U.S. sanctions wrecked its already bleeding economy, Israeli covert and overt operations raised questions about the efficacy of its security apparatus and regional realignments posed new geopolitical risks. It lost a master strategist when Soleimani was killed. A mysterious explosion damaged a centrifuge assembly hall at its main nuclear site, Natanz, earlier this year.

In Syria, Iranian assets and militias came under repeated attacks from Israeli jets in recent months, when Vladimir Putin’s Russia, an Iranian ally that practically controls Syria’s airspace, looked away. And now, it has lost a top nuclear physicist.

Iran faces a growing dilemma. If it doesn’t retaliate in the wake of repeated provocations, there would be questions, both inside and outside the country, about its ability to protect the regime’s top leaders or take counter-measures against what it calls “terrorism” of its sworn enemies. If it takes any major retaliatory steps, it could escalate the conflict, providing room for Israel and the Trump administration to take rapid military steps, which would cut off the diplomatic path for Mr. Biden to take the U.S. back to the nuclear deal.

As U.S. plans to withdraw, people worry that Taliban has changed little since the darkest days of its regime Source: thehindu.com Related

German Chancellor Angela Merkel said in a her New Year’s message she is fighting climate change with all her strength to enable future generations to live in peace and prosperity. “Global warming is real. It is threatening,” Ms. Merkel said in the recorded speech which will be broadcasted on Tuesday evening. Rising world temperatures and […]

Brazilian President Jair Bolsonaro on Wednesday said that Latin America’s Amazon countries will meet in September to discuss both protecting and developing the rainforest region, which has been hit by weeks of devastating fires. The Brazilian leader also escalated a deeply personal dispute with French President Emmanuel Macron, accusing him of portraying himself as “the […]