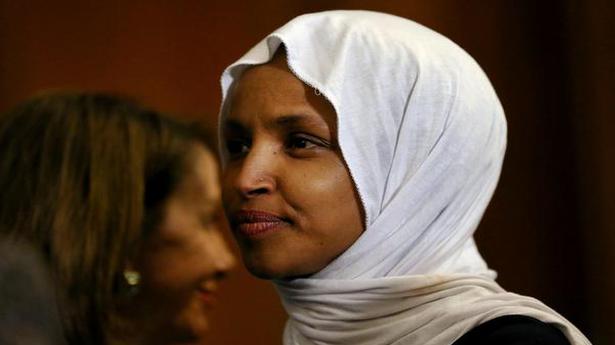 A western New York man has been charged with threatening to kill US Rep. Ilhan Omar of Minnesota.

Authorities did not say when Carlineo was arrested.

Ms. Omar is among the first of two Muslim women to serve in Congress.

The FBI said in a criminal complaint Carlineo called her a “terrorist” and threatened to shoot her.

The bureau said that Carlineo sounded angry during the call but “spelled his name correctly and provided contact information” to a staffer.

Carlineo told the FBI that he is a patriot, “loves the president and that he hates radical Muslims in our government,” the criminal complaint says.

Carlineo’s defense attorney declined to comment on the charges Friday.

Ms. Omar was met with backlash for remarks she made earlier this year on Israel, including comments that American supporters of Israel are pushing people to have “allegiance to a foreign country .” Some people perceived Omar’s comments were anti-Semitic.

She later apologized, saying “anti-Semitism is real and I am grateful for Jewish allies and colleagues who are educating me on the painful history of anti-Semitic tropes.” Ms. Omar, a Somali-American, has also received anti-Semitic and racist comments.

Archeologists in Peru say the 227 bodies they have unearthed from a site used by the pre-Columbian Chimu culture is the biggest-ever discovery of sacrificed children. Archeologists have been digging since last year at the huge sacrificial site in Huanchaco, a beachside tourist town north of the capital Lima. “This is the biggest site where […]

Australia’s prime minister on Thursday played down any potential link between the arrest of a suspected Islamic State group member in Turkey and a World War I battle commemoration attended by hundreds of Australians and New Zealanders at the Gallipoli peninsula. A Syrian national was detained in Tekirdag province before the annual gathering for a […]