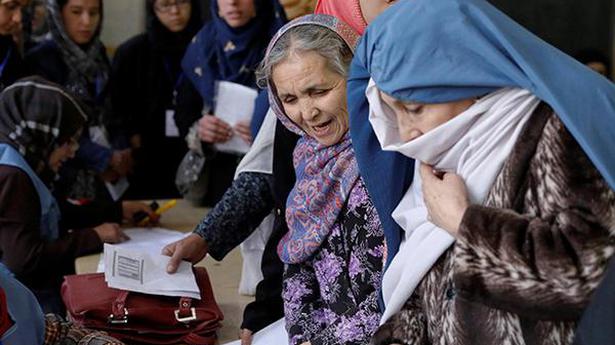 The fifth phase of meetings between Zalmay Khalilzad, the U.S.’s special envoy for peace, and Taliban leaders concluded earlier this month. Very little has been revealed about the nature of the proposed deal between the two parties, raising serious concerns among Afghans, especially women, who suffered greatly the last time the Taliban had control over the country.

The group’s leaders have made several statements assuring that they intend to uphold rights and freedom of women. “We consider woman as the builders of a Muslim society and are committed to all rights of women that have been given to them by the sacred religion of Islam,” Sher Mohammad Abbas Stanikzai, a Taliban leader, said during negotiations in Moscow earlier this year.

However, not everyone is convinced, owing not only to the group’s own past record but also to the many recent cases of mistreatment of women in regions it controls. In early March, a 32-year-old woman was publicly lashed for not wearing a face veil in the Sancharak district of the northern province of Sar-e-Pol. A few weeks later, the Taliban executed a 25-year-old pregnant woman in the same province after she condemned the insurgents. The Taliban has also been very vocal against who it refers to as “so-called women’s rights activists”.

In response, there is already a movement simmering in social and public spaces, led by women, seeking inclusion in the talks. A campaign spearheaded by Afghan journalist Farahnaz Forotan has been asking them to speak out about their “red lines” — values that are non-negotiable to them. “I am Farahnaz Forotan. I am a journalist. My red line is is my pen and my freedom of expression,” she tweeted earlier this month. Hundreds of Afghan women joined her later with demands that their rights be safeguarded in the peace negotiations.

“Peace must not come at the price of going back. Because we achieved a lot these past years. Will women still have to pay a price? Isn’t once more than enough?,” she wrote. “This is what “MyRedLine” (campaign) is about, voicing collectively what we are not going to go back to, regardless of the regime that will rule this country,” Ms. Forotan said. Her words have found resonance among many women who do not want to repeat history.

Maryam Yusuf (name changed), an Afghan medical professional, shared her concerns with this writer. “I do fear [about] the Taliban coming back to power in Afghanistan, having already lived and escaped that hell once before,” she said.

During the Taliban years, Ms. Yusuf had watched her elderly mother being lashed publicly by the group’s ‘moral police’ for not covering her face. “My mother was a very religious lady who prayed five times a day, and yet they beat, humiliated and abused her for not being faithful. We left a few months after that incident,” she recalled, adding that there is a genuine fear among many women that they might once again be forced to leave the country.

Among the demands made by the Taliban is the call to change the current Constitution. However, Afghan activist Samira Hamidi noted that the Taliban is not equipped to form and implement new laws. “It is important to remember that all the laws… the Taliban had put in place and are using today are very informal. They didn’t even have a Constitution during their regime,” she told this writer.

“If there is any agreement made that allows the Taliban to practise an informal justice system, it will really undermine the achievements of 18 years, which include a law on ending violence against women, laws on ending harassment, on increasing women in workplaces, laws that address women’s role in the elections, etc.,” Ms. Hamidi warned. She added it will be very difficult for the insurgent group to impose its laws, especially concerning women, this time around.

Agreeing with Ms. Hamidi, Ms. Yousef added she does foresee a stronger resistance from Afghans were the Taliban to return.

“The thing that makes me optimistic is that the whole country is more aware and connected. People know about their basic rights, women and youth know about the rights they deserve and are willing to fight for it. Even if the Taliban comes to power, it will face a lot of resistance. It will not be as easy for it to control Afghans,” she said.

Ruchi Kumar is a freelance journalist based in Kabul.

Young climate activists including Swedish teenager Greta Thunberg told business and political elites gathered on Tuesday at the World Economic Forum that they aren’t doing enough to tackle the climate emergency and warned them that time was running out. At a panel in the Swiss ski resort of Davos, climate campaigners expressed hope that their […]

A 13-year-old girl was killed in a shooting at a North Carolina mall parking lot and two other juveniles were hurt, police said. Concord police responded to a call about a fight outside a Dave and Buster’s at Concord Mills mall Saturday night, police said in a statement. Officers discovered there had been a shooting […]