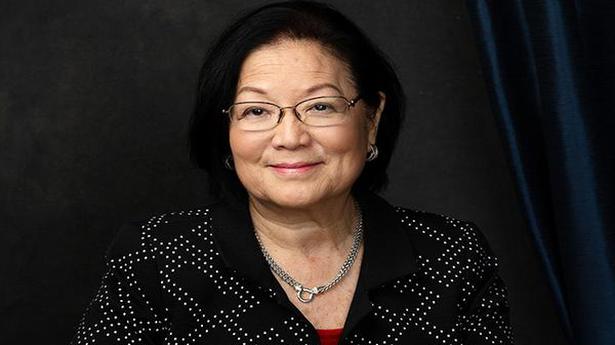 February 19 is observed as the Day of Remembrance by many in the U.S., as it marks the incarceration of thousands of Japanese-American citizens and Permanent Residents during the Second World War. This year, three Democratic Members of Congress — Tammy Duckworth, Mazie Hirono (in picture) and Mark Takano (California) — re-introduced a 2017 Bill in the House of Representatives in time for the anniversary.

Part of what has motivated the legislation is President Donald Trump’s “divisive policies and rhetoric that demonise the Muslim community and other marginalised groups”, according to Congresswoman Hirono. “We cannot allow what my parents, grandparents and 1,15,000 other Japanese Americans underwent during the Second World War to ever happen again in our country,” Ms. Takano had said in February.

In December 1941, the Japanese bombed Pearl Harbor, pulling the U.S. into the War. Within hours, approximately 3,000 Japanese citizens, who were being watched by the FBI, started being rounded up. They were sent to camps set up by the Department of Justice across the country. Some 1,500 Japanese residents of Hawaii (1% of the islands’ Japanese population) were taken into internment camps on the mainland.

Then came February 19, 1942, when President Franklin D. Roosevelt signed Executive Order 9066, despite notable opposition from his own administration. The order, couched in fairly generic terms, gave the War Secretary powers to demarcate areas from which individuals could be excluded. Its application, however, was specific and resulted in some 1,10,000 issei and nisei, Japanese immigrants and their American children, respectively, from the West Coast being forcibly moved to internment camps. Most of those held captive were American citizens.

The process was driven by Gen. John DeWitt. It, however, did not go unchallenged. Fred Korematsu, a Japanese resident of California, refused to move into the camps and was arrested. His case went all the way to the Supreme Court, which confirmed, 6-3, that the internment order was valid. In fact, February’s Bill is titled, ‘Korematsu-Takai Civil Liberties Protection Act of 2019’ in honour of Korematsu and late Congressman from Hawaii, Mark Takai, who had worked on the issue.

After the war was over, the camps began closing and by 1946, the internees were released. Many of them had lost their businesses and their property and had to rebuild their lives from scratch. In 1980, the federal and bipartisan Commission on Wartime Relocation and Internment of Civilians was set up to investigate the fallout of ‘9066’ and the internment of U.S. citizens and permanent residents as well as Alaskan natives, who were also detained during the War. The Commission unanimously found that the internments were unnecessary and that the causes for the events were “race prejudice, war hysteria and a failure of political leadership”. The findings culminated in the Civil Liberties Act, signed into law by President Ronald Reagan in 1988, resulting in an offer of $20,000 and a formal apology letter to the survivors of the internment.

Last June, when the Supreme Court upheld Mr. Trump’s ‘travel ban’ on individuals from certain Muslim-majority countries, Justice Sonia Sotomayor, in her dissenting opinion, drew a comparison to Korematsu v U.S. Chief Justice John Roberts, despite taking issue with what he thought was an inappropriate reference to Korematsu, added: “The dissent’s reference to Korematsu, however, affords this Court the opportunity to make express what is already obvious: Korematsu was gravely wrong the day it was decided, has been overruled in the court of history, and to be clear ‘has no place in law under the Constitution [a reference to the dissenting view in the original case]’.” Yet, it is unclear whether Korematsu — and similar cases — have actually been overturned. That is where the Korematsu-Takai Bill comes in, seeking to codify protections and preventing detention based solely on a characteristic like ethnicity, race, national origin and religion.

“This Bill will establish a first line of defence against any attempt to repeat mass curfews or mass detention of citizens,” said Ms. Duckworth.

The IMF has said that Sri Lanka’s economy is gradually recovering from Easter Sunday terrorist attacks in 2019 with GDP growth projected at 3.7% in 2020. Issuing an end-of-mission statement, an IMF staff mission to Sri Lanka estimated the Real GDP growth at 2.6% in 2019 but expected the GDP to bounce back in 2020 […]

Thirty-six people were killed and 23 more injured when a tourist guesthouse under construction in Cambodia collapsed, trapping workers under rubble, officials said on Sunday. Officials said rescue operations ended two days after the seven-storey concrete building collapsed on Friday in the coastal town of Kep, about 160 km southwest of the capital Phnom Penh. […]