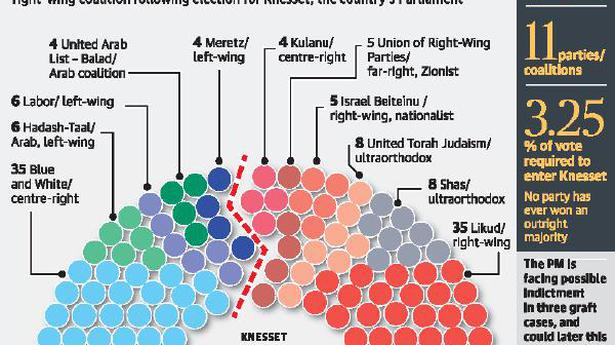 The final ballots of Israel’s election were being tallied on Thursday, with another nationalist faction tantalisingly close to crossing the 3.25% electoral threshold needed to get into Parliament. Should the New Right party of Education Minister Naftali Bennett and Justice Minister Ayelet Shaked break in, Prime Minister Benjamin Netanyahu’s comfortable parliamentary majority would grow even larger. The final result depended on the votes of soldiers, diplomats, prisoners and hospital patients who vote in unusual circumstances.

Mr. Netanyahu managed to cruise to a relatively easy victory that secures him a fourth consecutive term in office, and fifth overall.

Mr. Netanyahu’s Likud and the rival Blue and White party ended deadlocked with a projected 35 seats apiece in the 120-seat Parliament. But Likud and its traditional Jewish ultra-Orthodox and nationalist allies were in command of a 65-55 majority in the Knesset, Israel’s Parliament. One of the major factors hastening Mr. Netanyahu’s victory was the low voter turnout among Israel’s Arab residents, which was below 50%.

Mr. Netanyahu’s campaign against Arab politicians, together with a new alliance with anti-Arab extremists and the passage last year of a contentious nation-state law, which enshrined Israel as the homeland of the Jewish people alone, deepened calls for an election boycott in Arab communities. Arab leaders accused Mr. Netanyahu of demonising their sector throughout the campaign. Only a big push in the final hours of voting secured the survival of the two primary Arab parties in Parliament. Still, they saw their representation dip.

On Thursday, a public relations firm said it orchestrated the operation on Likud’s behalf, distributing 1,200 hidden cameras, and claiming to have played a role in the suppressed vote.

A new coronavirus has killed 25 people in China and infected more than 800, the government said on Friday, as the World Health Organisation declared it an emergency but stopped short of declaring the epidemic of international concern. China’s National Health Commission said 830 cases had been confirmed so far and 25 people had died […]

Palestinians have cut security ties with U.S. and Israel: Abbas

The Palestinian Authority has cut all ties with the U.S. and Israel, including security relations after rejecting a West Asia peace plan presented this week by U.S. President Donald Trump, Palestinian President Mahmoud Abbas said on Saturday. At a meeting of Arab Foreign Ministers in Cairo, Mr. Abbas reiterated his “complete” rejection of Mr. Trump’s […]