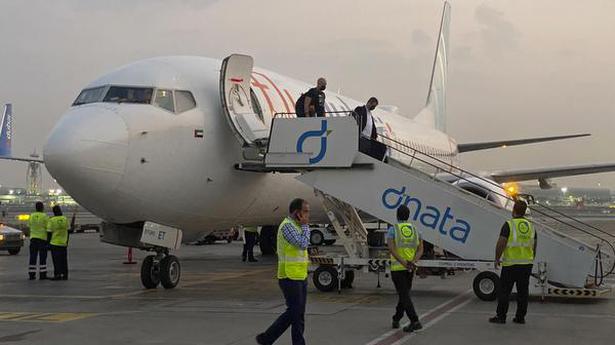 The flight had Jewish Israelis and a number of Arab Israelis on board.

The first flight carrying Israeli tourists to the United Arab Emirates landed on Sunday in the city-state of Dubai, the latest sign of the normalisation deal reached between the two nations.

FlyDubai flight No. FZ8194 landed at the Dubai International Airport just after 5:40 p.m., bringing the tourists to the skyscraper-studded city after a nearly three-hour trip. The low-cost carrier had sent one of its Boeing 737s to Ben-Gurion International Airport in Tel Aviv earlier on Sunday morning to pick up the passengers.

The flight flew across Saudi Arabia and then over the waters of the Persian Gulf to reach the UAE, a federation of seven sheikhdoms also home to Abu Dhabi.

The flight, put together by an Israeli company called Gaya Tours, saw Jewish Israelis and a number of Arab Israelis on board. Many of the Jewish Israelis wore kippah head coverings.

Many of the people on the flight said it was not their first time to the UAE, but all said they were excited to be in Dubai. The tourists were joined by a number of businessmen eager for opportunities in the Emirates.

The arrival of tourists comes as Dubai in particular tries to revive its vital tourism industry amid the ongoing coronavirus pandemic. The UAE and Israel have agreed to launch regular commercial flights between their countries soon, while other recent flights have carried business and governmental delegations.

FlyDubai plans to begin its flights to Tel Aviv later this month. The airline described Sunday’s flight as a “commercial charter flight” for the incoming tourists, without elaborating.

It comes as Israel and the UAE, which had maintained covert contacts for years, brought their diplomatic relationship out into the open. It signed a normalisation deal with Israel alongside Bahrain at a White House ceremony in September, making the them the third and fourth Arab nations to currently have peace with Israel.

But while Egypt and Jordan earlier signed peace deals, the UAE has said it anticipates having a “warm” peace with Israel. The Emirates also hopes the deal will aid its efforts to purchase advanced F-35 fighter jets from the U.S. The deals also unite three nations that remain suspicious of Iran.

China, U.S. kick off new round of tariffs in trade war

China and the United States began imposing additional tariffs on each other’s goods on Sunday, the latest escalation in a bruising trade war, despite signs that talks would resume some time this month. A new round of tariffs took effect from 0401 GMT, with Beijing’s levy of 5% on U.S. crude marking the first time […]

Detectives said they were hunting one suspect after being called to reports of stabbings at four separate locations in the city centre. Source: thehindu.com Related

“I’m running for President to defeat Donald Trump and rebuild America,” the former New York City Mayor, Michael Bloomberg, wrote as he launched his campaign a few days ago. “He [Trump] represents an existential threat to our country and our values. If he wins another term in office, we may never recover from the damage.” […]