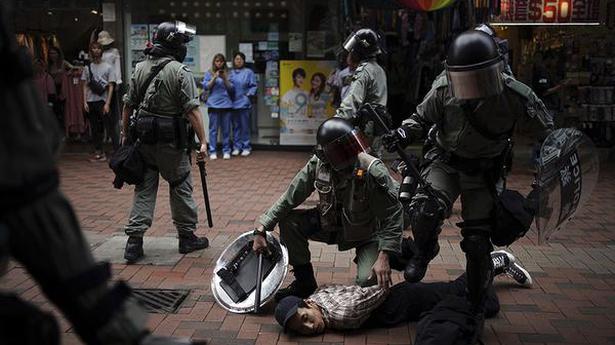 Riot police clashed with anti-government protesters across Hong Kong on Sunday as masked activists vandalised businesses deemed sympathetic to Beijing in another weekend of chaos in the financial hub.

Police said an officer was taken to hospital after his neck was slashed. Local television networks also broadcast footage of a man beaten bloody by protesters after they found a baton in his bag and suspected him of being an undercover officer.

In Mongkok, a bustling shopping district on the Kowloon peninsula, officers burst from an unmarked van over a blockade of bamboo scaffolding and quickly chased down multiple protesters.

Police arrested dozens of protesters, and said they used “minimum force”. Later, protesters beat a woman accused of helping police clear barricades. She was struck with fists and umbrellas, and also had her face smeared with mud.

Protests and clashes were reported in half a dozen neighbourhoods, with police saying they fired tear gas during two incidents.

While the crowds were thinner, the flashmob tactics stretched police resources and still brought chaos to parts of the city.

British Prime Minister Boris Johnson lost his working majority in parliament on Tuesday when one of his Conservative lawmakers defected to the pro-European Union Liberal Democrats. Phillip Lee crossed the floor of the House of Commons just as Johnson began giving a statement on last month’s G7 summit. “I have reached the conclusion that it […]

Pakistan Prime Minister Imran Khan has issued directives to keep Maryam Nawaz with her father and former premier Nawaz Sharif at a leading hospital here after the federal government faced criticism for shifting her back to jail, according to a media report. Maryam was admitted to the Services Hospital in Lahore on Wednesday where she […]

Record numbers of Hong Kong people voted on Sunday in district elections viewed as a barometer of support for city leader Carrie Lam, who has been besieged by nearly six months of often violent pro-democracy protests. Brutal attacks on election candidates in recent weeks have thrust the lowest tier of government in the Chinese-ruled city […]