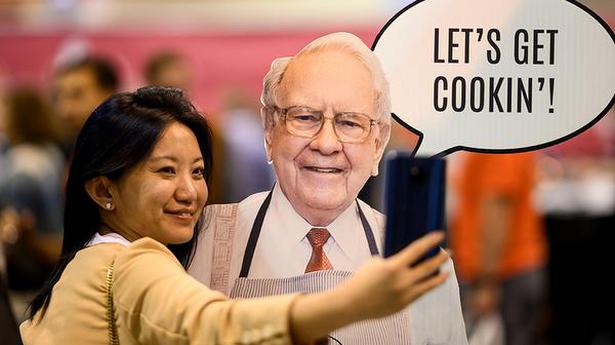 The father and son, both successful entrepreneurs, made the pilgrimage to the U.S. city of Omaha to bask in the wisdom of billionaire Warren Buffett, whose simple approach to investing — and whose mistrust of Wall Street — they share.

Both Paul Singh, who is 68, and son Jay Phoenix Singh, 32, built successful businesses that they were then able to sell for premium prices, making both men multi-millionaires.

Despite their difference in age, the Singhs — one a Baby Boomer, the other a millennial — share a long-time devotion to the words of Warren Buffett, 88, owner of the third-largest fortune in the world.

“Warren Buffett is the quintessential American dream of coming from very little and being able to really make a name for yourself,” said Jay Phoenix.

They were drawn here by the annual shareholders meeting of Buffett’s Berkshire Hathaway holding company, which gives them, and others like them, a chance to soak up the market-moving wisdom of the “Oracle of Omaha.”

The Singhs are big admirers of Buffett’s taste for discretion and his simple but shrewd approach to investment.

“You buy only things that are useful,” said Mr. Paul. “Money doesn’t mean that you have to show off and buy cars with a big torque (or) houses that you don’t need.”

Mr. Paul follows that advice in his own life: he sports no bling or other showy external signs of wealth.

“I am still driving my 2004 Honda… and I live with my parents,” said Jay Phoenix, before adding, “but as Mr. Warren says, what matters is your long-term vision, your long-term plan.”

Mr. Paul arrived in the U.S. at the age of 20 to pursue his graduate studies with “50 dollars” in his pocket.

Coming from a poor family in northern India near New Delhi, he managed to gain acceptance to Harvard, where he earned an MBA degree in 1982. He founded three successive companies, of which the latest — Primus Telecommunications — achieved turnover of $1 billion just six years after its creation.

In the 2000s, this father of two — married to a British woman — created the Rezon8 fund, investing in American startups specialising in software and information technology.

While Mr. Paul has been a mentor to his son, he did not give him the capital for his own startup: “I didn’t want my father to give me money,” said Jay Phoenix. “I have some savings (and)… was able to count on it.”

With doctorates in psychiatry and psychology, Jay Phoenix has been one of the youngest lecturers at some of the most prestigious U.S. and British universities (Princeton, Harvard, Oxford, Cambridge).

He established the Violence Research Center, dedicated to the study and prevention of interpersonal violence.

Neither father nor son invests in stocks, preferring the ETFs (exchange-traded funds) that are less speculative but still provide attractive returns.

Among the lessons the Singhs have learned from closely studying Mr. Buffett’s now famous letters to investors: invest for the long term, and don’t be afraid to make a mistake.

The last remains of the 39 Vietnamese who died while being smuggled in a truck to England last month were repatriated to their home country on Saturday. Photos by the official Vietnam News Agency showed the arrival at the Hanoi airport of 16 bodies and seven urns, which were flown from London. They were loaded […]

President Donald Trump on April 22 signed an order to temporarily block some foreigners from permanent residence in the United States, saying he was doing so in order to protect American workers during the coronavirus pandemic. India on on April 22 reported 50 new COVID-19 deaths and the recovery of 3,959 patients, taking the recovery […]