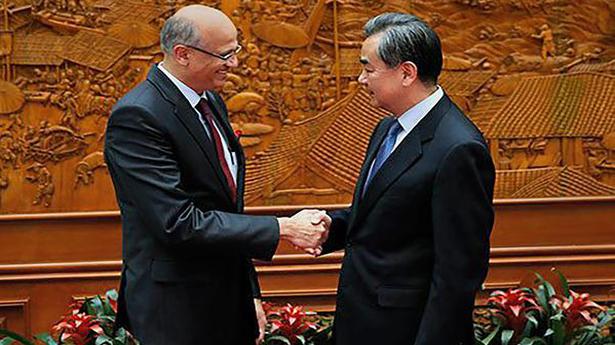 Foreign Secretary Vijay Gokhale will arrive in Beijing on Sunday for “bilateral consultations”, amid signs that China may review its position on lifting its “technical hold” on listing the founder of terror outfit Jaish-e-Mohammad (JeM), Masood Azhar, as an international terrorist.

Mr. Gokhale is arriving ahead of the Belt and Road Forum (BRF) – a mega event hosted by China that begins on April 25, in which 37 heads of State or government are participating. So far, there are no signs that India will be officially participating in it, though some members of the business community, academics and media personnel will be present.

On Friday, Mr. Wang said at a briefing on the BRF that the two countries were preparing for a second edition of a leadership summit as a follow-up to last year’s informal summit at Wuhan.

The Wuhan summit had reset ties between New Delhi and Beijing, which reached a new low during the mid-2017 Doklam military stand-off.

In a sign of improving ties, India is sending its warship, INS Kolkata, along with fleet tanker ‘Shakti’, to participate in next week’s International Fleet Review at Qingdao, marking the 70th founding anniversary of the Chinese People’s Liberation Army (PLA) Navy.

India has been pressing China to designate Azhar as a global terrorist after his outfit claimed responsibility for the February 14 Pulwama attack, in which 40 CRPF personnel were killed.

On March 13, China placed a “technical hold” on designating Azhar in the 1267 committee of the United Nations Security Council, despite stating that it was engaged in “mediation efforts” to ease tensions between India and Pakistan that spiked on February 27 following the Indian cross-border air strike on Balakot in Pakistan.

Since April 1, China has been saying that a consensus was emerging within the 1267 committee on designating Azhar, after rejecting a parallel initiative by the United States, backed by Britain and France, to seek a ban on him through a separate resolution in the Security Council plenary.

On Wednesday, Chinese foreign ministry spokesman Lu Kang said the Azhar issue was “moving towards the direction of settlement”.

Analysts point out that it is unlikely that China will lift its “technical hold” on Azhar before the BRF concludes on April 27, so as not to embarrass Pakistan Prime Minister Imran Khan, who will be participating in the international event.

Separately, China and Pakistan have been discussing Azhar’s listing. Pakistan on its part has so far been linking the Pulwama strike with the human rights situation in Jammu and Kashmir. “This [situation in J&K] is a concern because that leads to a reaction, and that reaction at times creates tension in the region, which must be avoided,” Pakistan foreign minister Shah Mehmood Qureshi said at a Beijing press conference on March 19.

Earlier this month, a three-member Pakistani delegation, led by Deputy Chairman of the Senate Saleem Mandviwala held talks with senior officials in Beijing, ahead of Mr. Khan’s arrival.

Chinese officials say Indian and Chinese delegations have been interacting at the U.N. headquarters in New York on the Azhar issue. Chinese officials had conveyed to their Indian counterparts their fears that in case the JeM head is proscribed, India will seek labelling of Pakistan as a state sponsor of terrorism, which Beijing roundly rejects.

China had requested sending Vice Foreign Minister Kong Xuanyou to India, a Chinese academic who did not wish to be named, told The Hindu. But the visit could not take place as the Indian side was not given any assurance that Beijing was inclined to concede to India’s request for listing Azhar as an international terrorist in the 1267 committee.

A Saudi-led coalition air strike on a prison in southwest Yemen killed at least 100 people, an official from the International Committee of the Red Cross (ICRC) said on Sunday. Franz Rauchenstein, head of the ICRC delegation in Yemen, told Reuters by telephone after visiting the site that bodies were still being pulled from the […]

Eight people were moved to a hospital in Bhopal as they were injured when part of a ramp collapsed at the Bhopal Railway Station on Thursday morning. While some are critical, no deaths were confirmed, said a Railways official. “Doctors are inspecting the patients at the Hamidia Hospital. An inquiry team has reached the spot […]