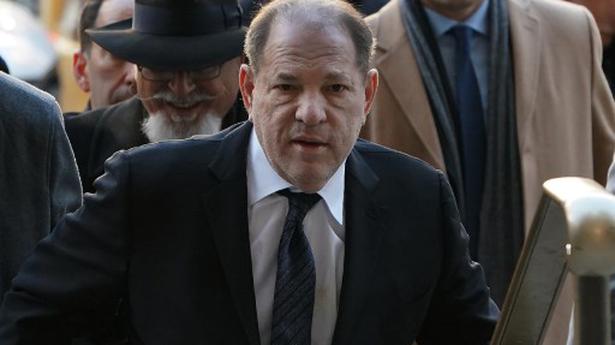 At times sobbing, former production assistant Mimi Haleyi told jurors Monday at Harvey Weinstein’s rape trial how she tried to fight off the disgraced movie mogul and told him “no, no, no” while he sexually assaulted her.

As one of two women whose assault claims led to Weinstein’s charges, Ms. Haleyi took the stand and detailed her claim that he forcibly performed oral sex on her at his New York City apartment in 2006. “I did reject him, but he insisted. Every time I tried to get off the bed, he would push me back and hold me down,” she testified Monday, adding that she told him she was menstruating in an attempt to deter him.

“I checked out and decided to endure it,” she said. “That was the safest thing I could do.”

Weinstein, 67, is charged with sexual assaulting Ms. Haleyi and raping an aspiring actress in a Manhattan hotel room in 2013. He insists any sexual encounters were consensual. She said she didn’t call the police because she was working in the U.S. on a tourist visa and was scared of Weinstein’s power, telling jurors, “Obviously, Mr. Weinstein has a lot more power and resources and connections and so forth. I didn’t think I’d stand a chance.”

Last week, Sopranos actress Annabella Sciorra testified that Weinstein overpowered and raped her after barging into her apartment in the mid-1990s. While outside the Statute of Limitations for criminal charges, Sciorra’s allegations could be a factor as prosecutors look to prove Weinstein has engaged in a pattern of predatory behaviour.

They crossed paths again at the Cannes Film Festival in 2006 and, when Ms. Haleyi expressed interest in working on one of his productions, he invited her to his hotel room and asked for a massage. She declined, saying she was “extremely humiliated.”

“I felt stupid because I was so excited to go see him and he treated me that way,” she testified. More meetings followed, and Weinstein secured Ms. Haleyi a job helping on the set of Project Runway, the reality competition show he produced. She testified that before the alleged assault, Weinstein showed up at her apartment and begged her to join him on a trip to Paris for a fashion show.

“At one point, because I just didn’t know how to shut it down so to speak…. So I said, ‘You know you have a terrible reputation with women, I’ve heard,’” Ms. Haleyi said. The then-revered Hollywood honcho “got offended,” she said. “He stepped back and said, ‘What have you heard?’”

Asked by prosecutor Meghan Hast if she had any romantic or sexual interest in Weinstein, Ms. Haleyi firmly answered- “Not at all, no.”

In testifying, Ms. Haleyi will have to deal with a defence team that said it plans to confront Weinstein’s accusers with their own words — messages they exchanged with Weinstein well after the alleged assaults. Weinstein’s lawyers argue the positive-sounding emails and texts call into question the accusers’ accounts.

The jury of seven men and five women also heard testimony from Dr. Barbara Ziv, a forensic psychiatrist who said that most sex assault victims continue to have contact with their attackers, often under threat of retaliation if the victims tell anyone what happened.

On the stand Monday, Ms. Haleyi said she dealt with the alleged assaults by compartmentalizing, occasionally interacting with Weinstein on a professional basis by passing along scripts from friends or discussing work opportunities.

“Honestly, I didn’t know how to deal with it so it’s almost like I put it away in a box, like it didn’t happen and I just carried along as usual,” she said.

The countries Secretary of State Mike Pompeo visited on a five nation-tour over the last week varied from longtime ally Britain to ex-Soviet republics in Central Asia. But the message he conveyed to his hosts stayed the same: Beware of China. In his trip to Europe and Central Asia, Mr. Pompeo denounced China’s human rights […]

Pro-India banners which appeared in different parts of Pakistani capital, including in the high security Red Zone, hailing India’s decision to revoke the special status of Jammu and Kashmir have been removed by authorities who arrested a man in this connection. The banners carried a map envisioning Akhand Bharat (undivided India) showing parts of the […]