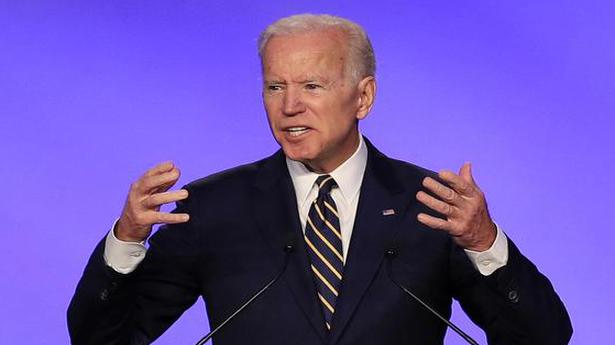 Former U.S. Vice President Joseph R. Biden Jr. announced on Thursday that he will run for the office of president of the United States next year.

Mr. Biden’s move, announced via a video, has been anticipated for months. The six-term former Senator from Delaware joins a galaxy of 19 Democratic presidential hopefuls, including women and progressives, as well as Hispanic, Asian, African American, gay and millennial candidates.

Mr. Biden has made two previous bid for the White House ( in 1998 and 2008). After losing his 2008 bid, he went on to serve — for two terms — as Vice-President in the Barack Obama administration.

The “Obama-Biden Democrat”, as Mr. Biden has described himself, has consistently emerged as the front-runner in opinion polls on Democratic candidates, followed by Senator Bernie Sanders, a self-described democratic socialist from Vermont. As Vice-President, Mr. Biden helped push for same-sex marriage, ending sexual assault and violence against women and for more stringent gun laws.

“The core values of this nation… our standing in the world… our very democracy…everything that has made America, America…is at stake. That’s why today I’m announcing my candidacy for President of the United States,” Mr. Biden said on Thursday.

“If we give Donald Trump eight years in the White House, he will forever and fundamentally alter the character of this nation. And I cannot stand by and watch that happen,” he added.

Mr. Biden toyed with the idea of a bid in 2016 — but did not ultimately join the race, his 46 year old son Beau’s death from brain cancer having taken a toll on him and his family. He has since said that he believes he could have won against Mr. Trump.

Mr. Biden’s video announcement included a clip of white supremacists marching through Charlottesville, Virginia, in 2017 and a counter-march and clash (which resulted in one casualty). Mr. Biden said that he “knew the threat to our nation was unlike any” he’d ever seen in his lifetime when U.S. President Donald Trump had said that there were “very fine people on both sides” in the Charlottesville context.

In a crowded field of Democratic candidates, Mr. Biden, an establishment candidate from the centre, is expected to focus his campaign theme around projecting himself the party’s best bet against Mr. Trump, rather than slotting himself into the Democratic political and policy spectrum, which has increasingly moved left.

Mr. Biden is, however, also a white male — one among several factors that could put him at an advantage, especially with blue-collared white voters, but may also potentially challenge his path to the White House. Last November’s midterm elections saw a record number of women elected to Congress, including young, progressive candidates and those from religious minorities.

In March Mr. Biden’s manner of physical interaction with women came under the scanner as several former colleagues and associates complained that he made them uncomfortable. Mr. Biden acknowledged he had made people uncomfortable but stopped short of an apology.

Mr. Biden has also been criticized for pushing for a tougher criminal justice system in the 1990s – which resulted in African Americans being disproportionately penalized and has become a campaign issue for Democrats. He has also faced criticism for his handling of sexual harassment allegations made against Supreme Court Justice Clarence Thomas during the latter’s confirmation hearings in the 1990s.

Mr. Biden, the son of steel worker from Pennsylvania, is expected to hold his first major fundraising event in the state on Monday.

Iran’s telecommunications minister announced on Sunday that the country has defused a second cyberattack in less than a week, this time “aimed at spying on government intelligence.” Mohammad Javad Azari Jahromi said in a short Twitter post that the alleged attack was “identified and defused by a cybersecurity shield,” and that the “spying servers were […]

WHO names deadly virus from China as ‘COVID-19’

The UN health agency on February 11 announced that “COVID-19” will be the official name of the deadly virus from China, saying the disease represented a “very grave threat” for the world but there was a “realistic chance” of stopping it. “We now have a name for the disease and it’s COVID-19,” World Health Organization […]

On Tuesday, March 19, 76-year-old Karen Uhlenbeck became the first women ever to receive the prestigious Abel Prize, an award specific to the field of mathematics. Abel Prize is modeled after the Nobel prizes, and is often referred as the Nobel Prize of mathematics. Uhlenbeck was awarded $700,000 (nearly Rs 5 crore at today’s exchange […]