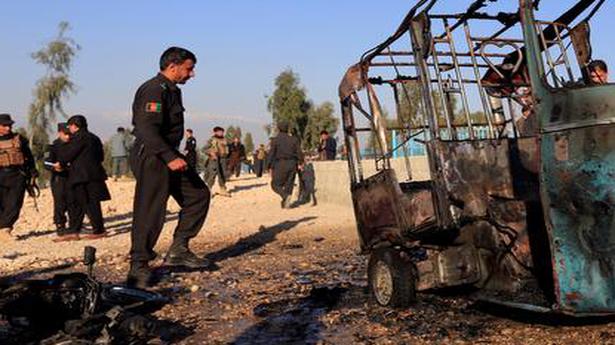 Militants in Afghanistan set off a suicide blast on Wednesday morning and stormed a construction company near the airport in Jalalabad, the capital of eastern Nangarhar province, killing at least four people, officials said.

The attack began with a suicide bomber, who was on foot and who detonated his explosives at the gate of the company called MQ, according to Gen. Ghulam Sanayee Stanikzai, the provincial police chief.

Mr. Stanikzai said several other attackers then stormed inside the company, triggering a gunbattle that drew U.S. forces to the scene.

Five people were wounded in the attack, he added and cautioned that those were only initial reports as the shooting was still ongoing and the casualty toll could rise further.

Provincial Governor’s spokesman, Attahullah Khogyani, said at least four attackers have died so far, including the suicide bomber. There are more militants who are resisting and are engaging with the forces, he added.

No one immediately claimed responsibility for the attack but both the Taliban and the Islamic State group are active in eastern Afghanistan, especially in Nangarhar province.

WHO warns overseas coronavirus spread may be ‘tip of the iceberg’

The head of the World Health Organization said on Monday there have been “concerning instances” of coronavirus among people with no travel history to China, warning that it could be the “tip of the iceberg”, as he urged all countries to prepare for the possible arrival of the novel virus that has killed over 900 […]

Coronavirus death toll in China mounts to 304, over 14,000 infected; US confirms 8th case

China’s new confirmed infections from the coronavirus outbreak increased by a daily record, up by 2,590 cases on Saturday to top 14,000, as the quickly growing epidemic prompted global travel restrictions and evacuations. The death toll from the coronavirus outbreak in China had reached 304 as of the end of Saturday, state broadcaster CCTV said […]