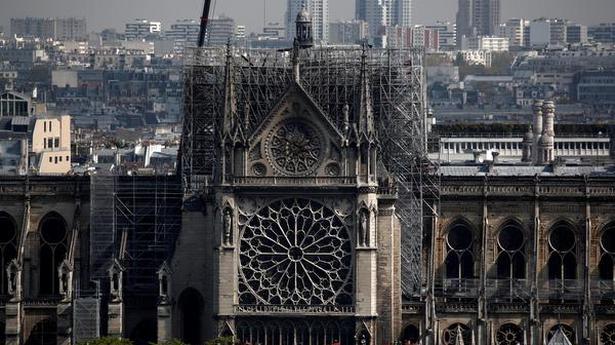 France on Wednesday announced it would invite architects from around the world to submit designs for replacing the spire of Notre-Dame Cathedral after a devastating blaze, as the government braced for a mammoth restoration challenge.

Prime Minister Edouard Philippe said the contest would decide whether the monument should have a new spire at all and if so, whether it should be identical to the fallen 19th-century model or be a wholly new design.

The world looked on in horror on Monday as flames engulfed the 850-year-old gothic masterpiece seen as encapsulating the soul of Paris and the spire came crashing down.

Explaining that having no new spire at all was an option, Mr. Philippe noted that Notre-Dame had been without a steeple for part of its history. “The international contest will settle the question of whether we should build a new spire, whether we should rebuild the spire that was designed and built by (Eugene) Viollet-Le-Duc, in identical fashion, or whether we should… endow Notre-Dame cathedral with a new spire adapted to the techniques and the challenges of our era.”

Mr. Philippe described the task of rebuilding it as “a huge challenge and historic responsibility”, a day after President Emmanuel Macron said the entire restoration should be completed in just five years.

The bells of French cathedrals were to ring out at 1650 GMT on Wednesday to mark the exact moment when the fire started on Monday. Mr. Macron had vowed to rebuild the iconic monument, the real star of Victor Hugo’s Hunchback of Notre Dame, by 2024 when France hosts the summer Olympics. “We can do it,” he said on Tuesday, calling France “a nation of builders.”

No sooner had firefighters extinguished the flames than pledges of donations towards restoring France’s best-loved monument, which attracted 12 million visitors in 2018, began to pour in.

Within 24 hours, the pledges had reached more than €800 million ($900 million), with French business magnates and corporations jostling to outshine each other with displays of generosity.

In a sign of the monument’s resilience, the copper rooster that topped its spire was found on Tuesday in the rubble of the roof, “battered but apparently restorable” according to a spokesperson for the Culture Ministry.

Turkey’s Opposition dealt President Recep Tayyip Erdoğan a symbolic blow by gaining ground in key cities in the country’s local elections. The Opposition won the capital, Ankara, a ruling party stronghold for decades, and was leading a tight race for Mayor in Istanbul, according to unofficial figures on Monday. The leader, who has dominated Turkish […]

China reported four more cases of pneumonia believed to be caused by a new coronavirus strain, causing rising concern globally that a disease health officials do not yet fully understand could spread during a key holiday period. The new virus, which was discovered in the central Chinese city of Wuhan, belongs in the same large […]

Alabama’s Senate passed a near-total ban on abortion on May 14, sending what would be the nation’s most stringent abortion law to the state’s Republican Governor. The GOP-dominated Senate voted 25-6 to make performing an abortion at any stage of pregnancy a felony punishable by up to 99 years or life in prison for the […]