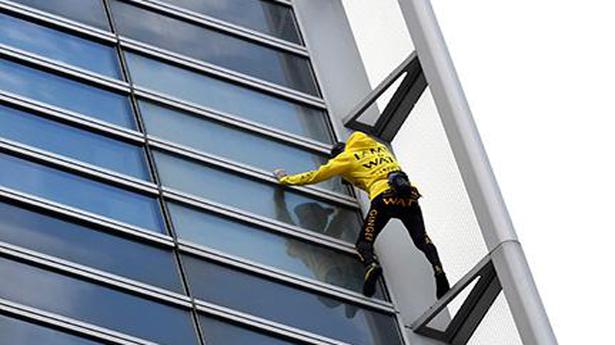 Dubbed the “French Spiderman”, Alain Robert scaled a skyscraper in Paris without a harness to raise funds for the renovation of Notre-Dame cathedral.

He was arrested shortly after competing the climb. “Because there’s no money left in the government coffers, the cathedral is alling into disrepair,” he said. His sponsors were writing a cheque of $5,650 to help finance the renovations.

He has climbed over 100 structures, including the Golden Gate Bridge in San Francisco and Burj al Khalifa in Dubai.

The Saudi-led coalition fighting the Iran-aligned Houthi movement in Yemen said on Monday the Houthis had seized a vessel towing a South Korean drilling rig at the southern end of the Red Sea. The vessel was seized late on Sunday by armed Houthis, Coalition spokesman Colonel Turki al-Malki said in a statement carried by Saudi […]

A Saudi Air Force second lieutenant killed four people and wounded eight others on Friday in an unexplained shooting rampage at a US Navy base in Florida where he was training, US officials told Reuters. Sheriff’s deputies responding to the early-morning incident shot and killed the gunman, who was armed with a handgun at the […]