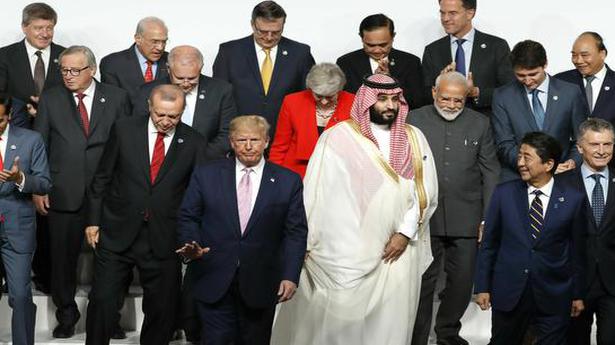 World leaders attending a Group of 20 summit in Japan are clashing over the values that have served for decades as the foundation of their cooperationPrime Minister Narendra Modi on Friday put forward a five-point approach to address common challenges facing the world, including protectionism, unilateralism at global financial organisations like the WTO and terrorism.

Here are the updates:

The two leaders met in this Japanese port city on the sidelines of the G-20 summit.

The two leaders met in this Japanese port city on the sidelines of the G-20 summit.

The main focus of India’s Act East Policy is to shift the country’s trading focus from the west and neighbours to the booming South East Asian countries.

The Moon administration’s ‘New Southern Policy’ focuses on South Korea’s development of its relations with Southeast Asia and ASEAN.

“A natural partnership strengthened by historical ties. On the margins of #G20 Summit PM @narendramodi had a good meeting with President of Republic of Korea,” Ministry of External Affairs spokesperson Raveesh Kumar tweeted.

U.S. President Donald Trump made clear on Friday that trade was a top priority at a summit of leaders of Group of 20 nations, as Chinese leader Xi Jinping warned against rising protectionism and India and Russia defended multilateral trade rules.

“We actually sell Huawei many of its parts,” Mr. Trump said. “So were going to be discussing that and also how India fits in. And well be discussing Huawei.”

A White House official said Trump wanted to promote to Abe and Modi “a resilient quality secure infrastructure” a reference to the U.S. push with allies to keep the Chinese company out of next generation telecoms networks.

Washington has pressed its allies to shun Huawei in their fifth generation, or 5G, networks on security grounds, but has also suggested it could be a factor in a trade deal with Chinese President Xi Jinping, whom Trump meets on Saturday.

“The trade relations between China and the United States are difficult, they are contributing to the slowdown of the global economy,” he told a news conference.

Mr. Xi also warned about the protectionist steps he said some developed countries were taking.

“All this is destroying the global trade order… This also impacts common interests of our countries, overshadows the peace and stability world wide,” Xi told a gathering of leaders of the BRICS grouping of nations on the sidelines of the G20 meet.

Mr. Modi at the same meeting called for a focus on reforming the World Trade Organization and Mr. Putin decried what he called efforts to destroy the Geneva-based body.

“We consider counter-productive any attempts to destroy WTO or to lower its role,” Mr. Putin said.

Speaking at the informal BRICS leaders’ meeting on the sidelines of the G20 Summit, in Osaka, Mr. Modi said that there was an immediate need to strengthen the WTO, fighting protectionism, ensuring energy security and work together to fight terrorism.

“On the other hand, the lack of resources is reflected in the fact that there is a shortage of an estimated USD 1.3 trillion in investment for emerging market economies,” he said.

He said making development and progress inclusive and sustainable is the second major challenge.

“Rapidly changing technologies such as digitisation and climate change are concerns not just for us, but also for the future generations. Development is in the right direction when it reduces inequality and contributes to empowerment,” the Prime Minister said.

Mr. Modi thanked Mr. Trump for expressing his “love towards India” in a letter recently delivered by U.S. Secretary of State Mike Pompeo.

The Prime Minister said that he wants to discuss Iran, 5G, bilateral relations and defence ties with Mr. Trump.

The U.N. chief is urging G-20 leaders to take action on equitable and stable reforms to strengthen the global financial safety net and increase the global economy’s resilience.

U.N. Secretary-General Antonio Guterres said in a letter to leaders gathered in Osaka, Japan, for the two-day summit beginning Friday that while the world has made progress fixing some big problems it’s not happening fast enough or shared by all countries.

Mr. Guterres said that while there are good plans and vision, what’s needed are “accelerated actions, not more deliberations.”

(With inputs from agencies)

Egyptian government seeks to do away with popular autorickshaws

Motorised rickshaws known as tuk-tuks have ruled the streets of Cairo’s slums for the past two decades, squeezing through dusty alleys, dodging trash bins and fruit stands, blaring rhythmic electro-pop and navigating the city’s chaos to haul millions of Egyptians home every day. Now the government is taking its most ambitious stand yet again against […]

United National Party (UNP) deputy leader and cabinet minister Sajith Premadasa will run for president in Sri Lanka’s elections scheduled to be held in November, the ruling party announced on Thursday, ending weeks of uncertainty and apparent infighting over candidacy. Sajith Premadasa (52) is the son of late President Ranasinghe Premadasa. In the contest for […]