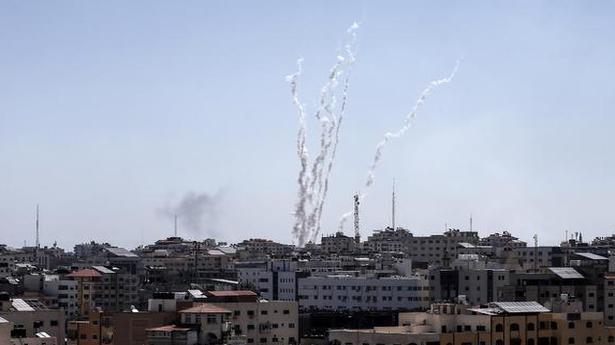 Gaza militants fired dozens of rockets into Israel on Saturday and an Israeli air strike killed one Palestinian gunman as hostilities flared up across the border for a second day.

The escalation began on Friday, when two Israeli soldiers were injured by Gaza gunfire near the border. A retaliatory Israeli air strike killed two militants from the Islamist Hamas group that governs Gaza. Two other Palestinians protesting near the frontier were also killed by Israeli forces.

On Saturday Israel hit Gaza with air strikes and tank fire after Palestinian militants fired more than 90 rockets toward Israeli cities and villages. The Israeli military said it had targeted rocket launchers and Hamas posts.

Israel and Hamas have managed to avert all-out war for the past five years. Egyptian mediators, credited with brokering a ceasefire after a Hamas rocket attack north of Tel Aviv in March triggered a burst of intense fighting, have been working to prevent any further escalation of hostilities.

A small armed pro-Hamas group in Gaza, The Protectors of Al-Aqsa, said one of its men was killed in an air strike on Saturday.

Across the border, rocket sirens sent Israelis running to shelters, but there were no reports of casualties as many of the missiles were intercepted.

Netanyahu will convene security chiefs on Saturday to discuss the situation, a source in his office said.

Hamas would “continue to respond to the crimes by the occupation and it will not allow it to shed the blood of our people”, its spokesman Abdel-Latif al-Qanoua said in a statement on Saturday. He made no explicit claim for Hamas having fired the rockets.

One of the attacks was claimed by the Palestinian Democratic Front for the Liberation of Palestine (DFLP), which said it fired rockets at the Israeli city of Ashkelon.

Israel has waged three wars on Gaza since Hamas took control of the territory in 2007. Israeli air strikes in retaliation for rockets from Gaza are a frequent occurrence.

The Palestinian Islamic Jihad militant group in Gaza said in a statement that the rocket barrages were a response to Friday’s events and that Israel has been delaying the implementation of previous understandings brokered by Cairo.

Hamas said on Thursday that its Gaza chief, Yeyha Al-Sinwar, had travelled to Cairo for talks on efforts to maintain calm along the border and alleviate hardship in the enclave.

Some two million Palestinians live in Gaza, whose economy has suffered years of blockades as well as recent foreign aid cuts. Unemployment stands at 52 percent, according to the World Bank, and poverty is rampant.

Israel says its blockade is necessary to stop weapons reaching Hamas and other armed groups in Gaza.

Cambodia says all COVID-19 patients recovered, no new cases for a month

Cambodia has reported 122 cases of the virus that causes COVID-19 and no deaths from the disease since it emerged in China and started spreading around the world, infecting more than 4.5 million and killing about 300,000 since January. Source: thehindu.com Related

A Russian Soyuz spacecraft carrying a humanoid robot docked with the International Space Station (ISS) on Tuesday, TASS news agency reported, citing a live broadcast. The FEDOR (Final Experimental Demonstration Object Research) robot is on a planned mission to support the crew and test its skills. It will stay on the station until Sept. 7. […]

The world’s largest aircraft, developed by aerospace venture Stratolaunch, completed its first flight test on Saturday. With a dual fuselage design and wingspan greater than the length of an American football field, the airplane took off from Mojave Air and Space Port in California at 6:58 am (Pacific Time), said Stratolaunch in a statement, Xinhua […]