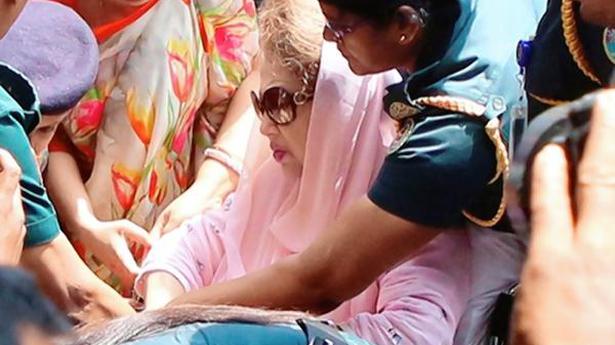 The after-effect of Bangladesh’s national election is still lingering. A drama played out over a sudden decision by two Opposition leaders to take the oath of office as MPs, breaking away from the Opposition bloc. The two leaders of Gono Forum, an ally of the election-time Opposition alliance, suddenly fell out with political colleagues. The decision was seen as a defiant gesture.

One of them, Sultan Muhammed Mansur Ahmed, was instantly punished: he was expelled from the party led by Kamal Hossain, a jurist who shot to newfound political fame for his role in cobbling together an Opposition alliance in the run-up to the December parliamentary election, which the Awami League had swept.

The duo angered the Bangladesh Nationalist Party (BNP), the main constituent of the Opposition alliance. The BNP said its candidates who won the election would not take oath. It cited widespread vote rigging and other irregularities in the polls won by Prime Minister Sheikh Hasina’s Awami League for a third straight term.

As Opposition anger panned out, Mr. Ahmed’s colleague Mokabbir Khan backtracked on his decision to seek a berth in Parliament and waited for the dust to settle. However, Mr. Ahmed went ahead, breaking with the party stance. Hours after he was sworn in on March 7, the Gono Forum sent out a letter ejecting him from all the committees of the party and casting him as an “enemy of the people”.

A spell of silence followed in the Opposition camp. For about a month, Mr. Khan, the second man from the Gono Forum to be elected in the parliamentary race, stayed on the sidelines, but did not lose hope.

Mr. Khan later wrote to Speaker Shirin Sharmin Chaudhury, with a request to clear his path to Parliament. He was finally sworn in on April 2. His fate in the party now hangs in the balance. Subrata Chowdhury, executive president of the Gono Forum, said Mr. Khan would “certainly” face action for “breaching party discipline”. The final decision, however, hinges on Kamal Hossain, the party chief.

Mr. Hossain flew into rage after Mr. Khan walked into his law chamber on Thursday in Motijheel. “Get out, just get out. This office is closed for you — forever,” he said in a burst of anger.

As Mr. Hossain is trying to put his own house in order, his key ally, the BNP, plans to hold a six-hour token hunger strike on April 7, demanding the release of party chairperson Khaleda Zia from jail. Ms. Zia, the 73-year-old Opposition leader, has been in jail since February 2018, when she was sentenced to five years for misappropriating an orphanage fund when she was Prime Minister from 1991 to 1996. The appeals court later doubled her sentence to 10 years. In a separate case, Ms. Zia was sentenced to seven years in jail on corruption charges linked to a charity named after her late husband.

Since Ms. Zia landed in jail last year, her health, and the care given to her, have ignited political emotions. Her supporters have decried the government’s handling of her medical treatment and demanded treatment for her in a specialised, private hospital. The authorities said the country’s jail code does not allow prisoners to be treated under their own arrangements.

For a long time, Ms. Zia had refused to be in a state-run hospital, citing lack of confidence in the government. Her party mentioned the Dhaka-based United Hospital as her favoured destination of treatment.

However, in a change of heart on April 1, she agreed to be treated at the state-run Bangabandhu Sheikh Mujib Medical University hospital.

She was seen wheelchair-bound in her first public appearance (in picture) in many months. Doctors said her health is not critical. The political wrangle now appears to be fading into the background. The BNP ponders over its next course of action over Ms. Zia’s freedom, a key demand.

Analysts will weigh the shifting political scenes for the rest of the month. Six MPs-elect from the BNP have not taken oath yet and the Election Commission will have to hold fresh polls to the empty constituencies if they are not sworn in by April 30.

By joining Parliament, the two Gono Forum leaders have weakened the Opposition’s argument for a nationwide re-election. The BNP will stay out of Parliament for a long stretch of time.

Arun Devnath is a journalist based in Dhaka.

The White House on August 26 claimed helping reduce India-Pakistan tension is one of the five big takeaways from the just-concluded G7 Summit. President Donald Trump returned home from the Group of Seven Summit held in the French city of Biarritz from August 24 and 26. In its daily round-up for August 26, the White […]

Zero evidence of any wrongdoing by President in impeachment hearing: White House

The White House on Friday said “zero evidence” of any wrongdoing by President Donald Trump was presented at the impeachment hearing by a Congressional panel, asserting that the former U.S. envoy to Ukraine deposed she was unaware of any criminal activity involving the President. The second public hearing of Speaker Pelosi and Congressman Schiff’s impeachment […]

Lying on a hospital bed in New York, Dr Madhvi Aya could only exchange text messages with her husband and daughter. She was not able to meet them one last time. The 61-year-old woman, who died last week, was afflicted with the coronavirus disease (COVID-19) while treating a positive patient in March. Dr. Aya, who […]