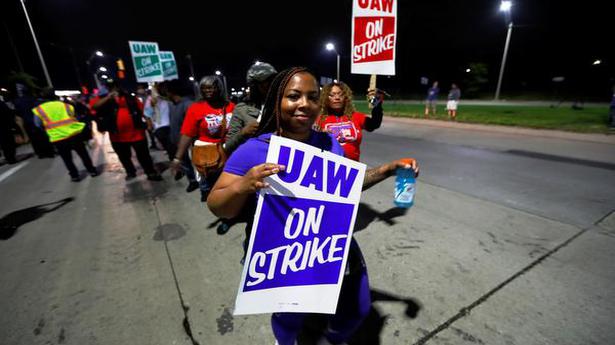 General Motors temporarily laid off an additional 1,225 workers in Canada and the United States on Monday as a strike entered its second week.

The actions affect 525 hourly workers at its DMAX engine plant in Moraine, Ohio, a GM spokesman said. DMAX is a joint venture owned 60% by GM and 40% by Isuzu.

The company also placed another 700 workers on temporary leave at powertrain plant in St. Catharines, Ontario, the spokesman said.

GM had previously furloughed 2,000 workers in Oshawa, Canada who work on cars and trucks.

Last Monday, almost 50,000 U.S. auto workers from 31 plants went on strike in the largest industrial action to hit the carmaker in more than a decade.

Talks between GM and the United Auto Workers (UAW) union had hit an impasse as they tried to negotiate a replacement agreement when the manufacturer’s four-year contract with workers expired.

Besides wages and health care, the talks have focused on GM’s use of temporary workers and on the union’s efforts to reverse a 2018 decision to shutter five plants in North America.

A spokesman for the UAW said Monday that the two sides had resumed talks.

The U.S. Senate opened the impeachment trial of President Donald Trump with quiet ceremony Thursday, senators standing at their desks to swear an oath of “impartial justice” as jurors on the president’s fate. House prosecutors recited the charges, and Chief Justice John Roberts presided in his black Supreme Court robe. The trial, only the third […]

Security forces fired tear gas amid confrontations in central Beirut that went into November 25 morning between Hezbollah supporters and demonstrators protesting against Lebanon’s political elite. The confrontations began after dozens of supporters of the Iran-backed militant group arrived on scooters and attacked the protesters with clubs and metal rods, chanting pro-Hezbollah slogans. Riot police […]