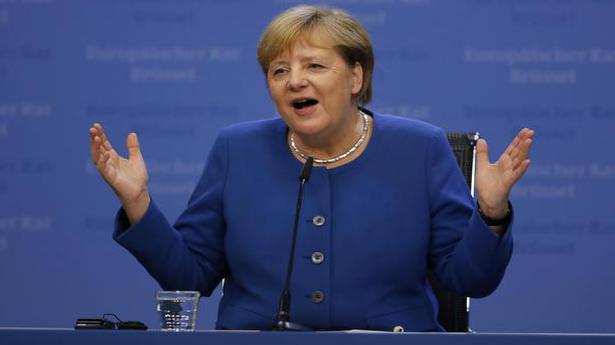 German Chancellor Angela Merkel will pay a three-day visit to India beginning October 31 with an aim to further broadbase strategic ties in an array of key areas including defence and security.

Official sources said Ms. Merkel and Prime Minister Narendra Modi, in their wide-ranging talks, will particularly focus on giving a new momentum to bilateral ties by significantly scaling up cooperation in several sectors.

During her visit from October 31 to November 2, Ms. Merkel will also meet top executives of major Indian companies which are active in Germany.

Mr. Modi and Ms. Merkel are also expected to deliberate on key regional and global issues including the situation in Afghanistan, West Asia and the Korean peninsula.

In June, Mr. Modi and Ms. Merkel met on the sidelines of the G20 summit in the Japanese city of Osaka and discussed ways to enhance cooperation in areas like artificial intelligence and cyber security.

India and Germany have been strategic partners since 2001. Both the countries have a mechanism of intergovernmental consultations at the level of head of governments which allows for a comprehensive review of cooperation and identification of fresh areas of engagement.

India is among a select group of countries with which Germany has such a dialogue mechanism.

Germany is India’s largest trading partner in Europe and India was ranked 25th in Germany’s global trade during 2018.

Germany is the seventh largest foreign direct investor in India since April 2000. Germany’s total FDI in India from April 2000 until March 2019 amounted to $11.7 billion.

A fast-track system to facilitate hassle-free regulatory clearances for German companies has been operating in the Department of Industrial Policy and Promotion (DIPP) since March 2016.

Pakistan Prime Minister Imran Khan departed for Riyadh by a commercial flight on his way back to Pakistan after his special plane given to him by the Saudi Arabia government had to turn back to New York due to a technical fault. The Prime Minister, who was accompanied by Foreign Minister Shah Mehmood Qureshi and […]

The total figure could be much higher. Source: thehindu.com Related

Legislation introduced in U.S. Congress to give Green Cards to foreign nurses and doctors

The move is likely to benefit a large number of Indian nurses and doctors, who are either on H-1B or J2 visas. Source: thehindu.com Related