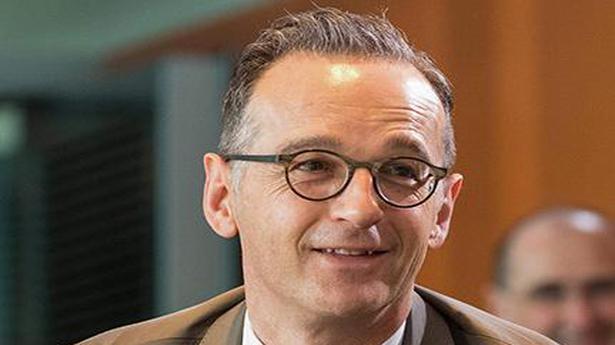 Germany and Britain on Monday warned Tehran not to breach uranium stockpile limits set by the 2015 nuclear deal, as the EU’s diplomatic chief dismissed Iranian threats as “political dialectics”.

Iran set a 10-day countdown on Monday to exceed the 300-kg limit set on its enriched uranium stocks, dealing another blow to the crumbling nuclear accord signed by Tehran and six international powers.

The EU has battled to save the agreement since U.S. President Donald Trump withdrew and reimposed sanctions, but Iran said it would step back from exceeding the 300-kg limit on June 27 only if “other parties live up to their commitments”.

German Foreign Minister Heiko Maas rejected the Iranian ultimatum and insisted Tehran must stick to its commitments under the deal. “We have already said in the past that we will not accept less for less. It is up to Iran to stick to its obligations,” Mr. Maas said after talks with EU Foreign Ministers in Luxembourg.

A spokesman for the British government echoed the call, saying the E3 — the European signatories to the deal — has “consistently made clear that there can be no reduction in compliance”.

The EU’s diplomatic chief Federica Mogherini said the bloc would not act on the basis of Iranian rhetoric but wait for reports by the UN’s nuclear watchdog, the International Atomic Energy Agency (IAEA).

In the pitch black, pre-dawn sky on the outskirts of the Iranian capital Tehran, a tiny fast-moving light can be seen racing up through the trees, as someone films from the ground. Then there is a flash of light as it seems to collide with something in the air. It is the ill-fated Ukrainian International […]

The teenage Sikh girl, who was allegedly abducted and converted to Islam before being married to a Muslim man in Pakistan’s Punjab province, could not be produced before a special judicial magistrate on Monday due to security issues, according to a court official. Jagjit Kaur, 19, who is the daughter of a Sikh priest, was […]