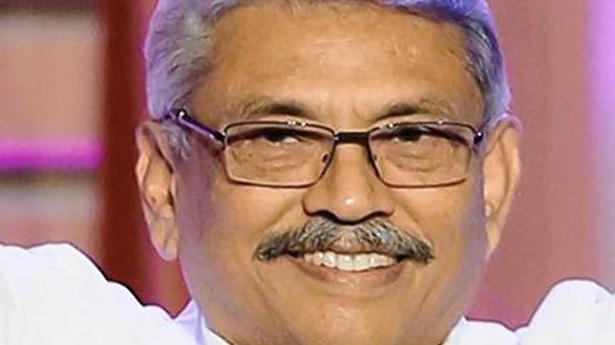 Presidential hopeful Gotabaya Rajapaksa will face a court test this week over his Sri Lankan citizenship — on which his candidacy depends — following a petition challenging its legality.

On Monday, Sri Lanka’s Court of Appeal set up a three-judge panel to hear the case on October 2 and 3. October 7 is the last day for presidential aspirants to file nominations.

War-time Defence Secretary Gotabaya Rajapaksa, brother of former President Mahinda Rajapaksa, had been a “dual citizen” of Sri Lanka and the U.S., until he reportedly renounced the latter some months ago, ahead of his presidential bid. Sri Lankan law bars those holding citizenship abroad from contesting for presidency. Early August, the local business newspaper Daily FT published a report pointing to questions over the validity of Mr. Gotabaya’s Sri Lankan citizenship documentation.

Well-known civil society members in Colombo, Mr. Viyangoda and Mr. Thenuwara were involved in the campaign for democracy and good governance that, in the 2015 presidential election, dislodged ex-President Mahinda Rajapaksa, propelling the President Maithripala Sirisena-Prime Minister Ranil Wickremesinghe combine to power. Over a month after their complaint to the IGP, and amid conflicting reports about likely progress in the high-profile case, the civil rights activists petitioned the Court of Appeal on the same matter last week, arguing that Mr. Gotabaya’s passport and National Identity Card had been issued “unlawfully”.

Commenting on the development, Keheliya Rambukwella, a spokesman for Mr. Gotabaya, said their side was certain of winning the case. “This only goes to show that they [ruling party] are really threatened by his candidacy, his reach and popularity. It is hilarious,” he told The Hindu.

Sri Lanka will go to polls on November 16, and Mr. Gotabaya, representing the Sri Lanka Podujana Peramuna (SLPP), is among the main candidates in the fray, along with the ruling United National Party’s Sajith Premadasa, the leftist Janatha Vimukthi Peramuna’s Anura Kumara Dissanayake and former Army commander Mahesh Senanayake, fielded by a broad civil society coalition.

The Palestinian president has chosen longtime adviser Mohammed Ishtayeh as his new prime minister, officials said on Sunday, a step that further deepens the rift with the rival Hamas group. President Mahmoud Abbas was expected to announce the appointment later in the day, the officials said, speaking on condition of anonymity pending a formal announcement. […]

The Italian city of Venice has been hit by ‘apocalyptic floods’ Mayor Luigi Brugnaro declared a state of emergency on November 13 when water levels reached 1.87 meters (6 feet) above sea level. It was the highest level since the record 194 cm set in 1966. The current flooding is due to a combination of high spring tides and a […]

India and Saudi Arabia will conduct their first-ever joint naval exercises in the first week of March next year, as the two sides agreed to enhance their cooperation in defence and security areas, sources said on Thursday. An Indian source privy to the development said a preparatory meeting on the proposed drills took place early […]