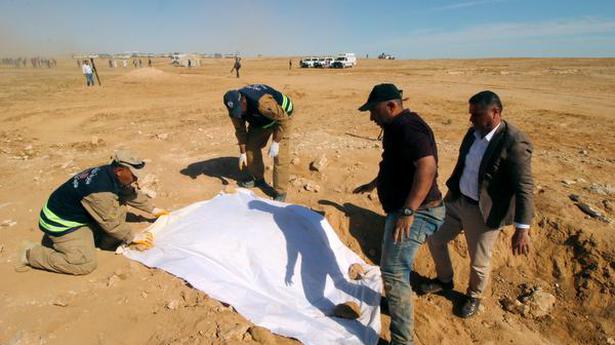 Iraq must never forget Saddam Hussein’s crimes or allow his party to return, President Barham Salih said on Sunday after attending the unearthing of a mass grave of Kurds killed by the former leader’s forces three decades ago.

The grave, found in the desert about 170 km west of the city of Samawa, contained the remains of dozens of Kurds made to “disappear” by Saddam’s forces, Mr. Salih’s office said.

They were among up to 1,80,000 people who may have been killed during Saddam’s “Anfal” campaign that targeted Iraqi Kurds in the late 1980s when thousands of Kurds were forced into camps.

“He killed them because they did not accept the continuation of this regime, because they wanted to live a free and dignified life,” said Mr. Salih, a Kurd. “The new Iraq must never forget these crimes that were committed against Iraqi people from all groups,” he said.

Australian cricketer Shane Warne’s baggy green cap has made more than 1 million Australian dollars ($685,000) at auction to aid those affected by wild fires across the country. When bidding closed on Friday morning the famous cap that is given to each Australian test cricketer on their debut was sold for $1,007,500. Australia’s Commonwealth Bank […]

California is giving childhood victims of sexual abuse more time to decide whether to file lawsuits, joining several states in expanding the statute of limitations for victims over warnings from school districts that the new rules could bankrupt them. The law signed Sunday by Gov. Gavin Newsom gives victims of childhood sexual abuse until age […]