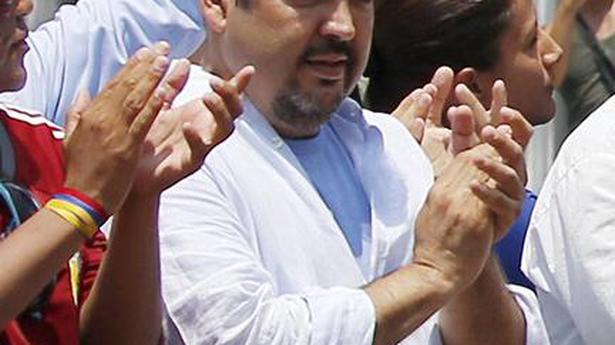 Venezuelan Opposition leader Juan Guaidó said on Thursday that intelligence agents had detained his Chief of Staff following a pre-dawn raid, signalling that President Nicolás Maduro may be cracking down on the Opposition’s challenge to his rule.

U.S. Secretary of State Mike Pompeo, in a post on Twitter on Thursday, called for Roberto Marrero’s immediate release and said “we will hold accountable those involved”.

“They have kidnapped @Robertomarrero, my Chief of Staff,” Mr. Guaido said in a post on Twitter, adding that the Caracas residences of Mr. Marrero and Opposition legislator Sergio Vergara had been raided before dawn. “Look after the President,” Mr. Marrero said in a voice message sent to reporters by Mr. Guaido’s press team, as he reported that agents were trying to enter his house.

The press team also sent a video of another Opposition lawmaker showing damage to the door of Marrero’s home and a broken lock.

Trump says he canceled peace talks with Taliban over attack

Hundreds protested in central Cairo and several other Egyptian cities late on Friday against President Abdel Fattah al-Sisi, responding to an online call for a demonstration against government corruption, witnesses said. Protests have become very rare in Egypt following a broad crackdown on dissent under Sisi, who took power after the overthrow of the former […]

North Korea Saturday fired two “unidentified projectiles” into the sea off its eastern coast, South Korea’s military said, the latest in a series of launches by Pyongyang. “Our military is tracking the movement in the North in case of additional launches,” the Joint Chiefs of Staff in a statement. South Korea’s presidential Blue House said […]