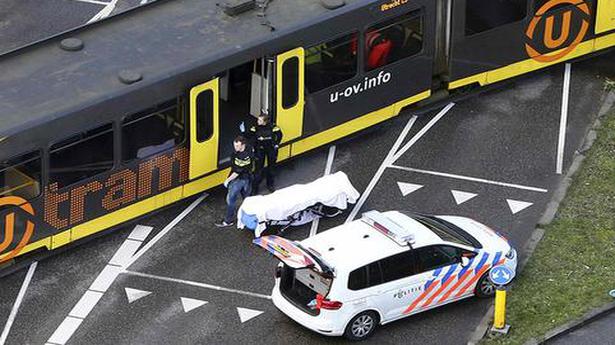 A gunman killed three people and wounded nine on a streetcar in the Dutch city of Utrecht on Monday morning in what the Mayor said appeared to be a terror attack, touching off a manhunt.

Authorities immediately raised the terror alert for the area to the highest level. Security at airports and key buildings were tightened.

The Utrecht police later released a photo of 37-year-old Turkish-born man Gokmen Tanis and said he was “associated with the attack.”

The incident came three days after 50 people were killed by a white supremacist at two mosques in New Zealand. There was no immediate indication of any link between the two events.

Dutch Prime Minister Mark Rutte said that “a terror motive is not excluded” and that the attack was met throughout the country with “a mix of disbelief and disgust.”

“If it is a terror attack, then we have only one answer — our nation, democracy, must be stronger that fanaticism and violence,” he added.

The shooting took place at a busy intersection in a residential neighborhood. Police erected a white tent over an area where a body appeared to be lying next to the tram.

Anti-terror officers gathered in front of an apartment building close to the scene. A dog wearing a vest with a camera mounted on it was also seen outside the building.

Police spokesman Bernhard Jens said one person might have fled by car, and he did not rule out the possibility that more than one shooter was involved.

The Netherlands’ anti-terror coordinator, Pieter-Jaap Aalbersberg, raised the threat alert to its highest level, 5, around Utrecht, a city of nearly 350,000.

Political parties halted campaigning ahead of provincial elections scheduled for Wednesday that will also determine the makeup of Parliament’s upper house.

In neighboring Germany, police said they stepped up surveillance of the Dutch border, watching not only major highways but also minor crossings and train routes.

German authorities said they were initially told to look out for a red Renault Clio compact car but were later informed it had been found abandoned in Utrecht.

U.S. President Donald Trump warned on Tuesday that efforts to resolve a trade dispute could wait until after U.S. election next November. “I have no deadline,” Mr. Trump told reporters in London. “In some ways I like the idea of waiting until after the election for the China deal.” Mr. Trump’s trade war with China […]

Bangladesh Prime Minister Sheikh Hasina has sought continued support of the European Union (EU) to ensure safe, dignified, and sustainable return of the displaced Rohingya refugees back to Myanmar, a media report said on Friday. “The Bangladesh Prime Minister thanked the EU members, including Italy, for their support to the cause of the Rohingya,” The […]

The COVID-19 pandemic is “a huge reputational loss” not just for China but for most major powers, says the former NSA Source: thehindu.com Related