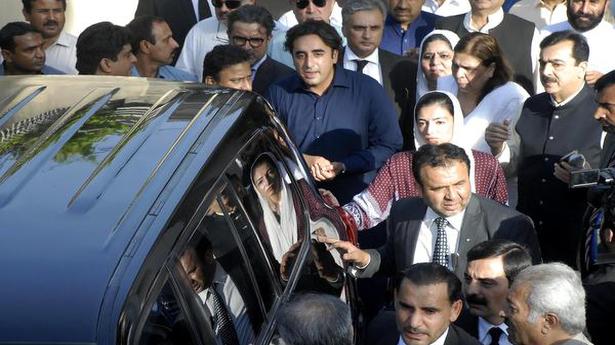 Opposition leader in Pakistan’s Punjab Assembly, Hamza Shehbaz, was arrested today outside the Lahore High Court by the officials of the country’s anti-graft body in cases related to money laundering and corruption.

The arrest took place after a two-member Lahore High Court (LHC) bench dismissed bail applications filed by Hamza, 44, after his lawyer opted to withdraw the pleas in two corruption cases.

Pakistan Muslim League — Nawaz (PML-N) vice president is under investigation by the National Accountability Bureau (NAB) in the Ramzan Sugar Mills, Saaf Paani project and assets beyond known means of income cases. He is accused of laundering money through his front men who are already in NAB’s custody.

Hamza, the son of PML-N president and National Assembly opposition leader Shahbaz Sharif, told reporters prior to his arrest that the government of “puppet Prime Minister (Imran) Khan” could not prove any corruption charge against him and his family members.

“I will quit politics if it is proven that I was involved in corrupt practices,” said Hamza whose father, also facing corruption cases, is out on bail.

His arrest comes a day after former Pakistan President Asif Ali Zardari was arrested by NAB in Islamabad.

The suporters of both PML-N and Pakistan Peoples Party (PPP) held demonstrations in Lahore and other parts of Punjab province against the arrest of their top leaders.

The opposition says the arrests of its top leadership will not stop it from launching a movement against the government that has failed to deliver on every front and is making the lives of Pakistanis miserable.

Lawyers are also gearing up for launching a drive against the government for sending references against two “upright” judges for possessing off-shore properties.

The Supreme Court Bar Association has given a country-wide protest call against the government’s action on June 14.

On April 5, the accountability watchdog had failed in its bid to arrest Hamza as it faced strong resistance from the Sharif family’s security men as well as PML-N supporters.

NAB has found evidence of money laundering on a massive scale through which Shehbaz and his family accumulated assets in the UK.

According to sources privy to NAB’s investigation, the illegally accumulated assets are worth Rs 85 billion to Rs 100 billion and were bought during Shehbaz’s tenure as the Punjab Chief Minister.

In the Ramzan Sugar Mills corruption case, Shehbaz and his son Hamza are accused of “fraudulently and dishonestly” causing a Rs 213 million loss to the national exchequer.

Shehbaz was arrested by the National Accountability Bureau in October 2018 and released on bail on February 14.

His brother and three-time Prime Minister Nawaz Sharif has been serving a seven-year prison term at Kot Lakhpat Jail in Lahore since December 24, 2018 when an accountability court convicted him in one of the three corruption cases filed in the wake of the apex court’s July 28, 2017 order in the Panama Papers case.

Both Sharif and his daughter Maryam have been sentenced to seven years in prison, respectively. Maryam’s husband Muhammad Safdar was jailed for one year in the same case.

Sharif and his family have denied any wrongdoing and allege that the corruption cases against them are politically motivated.

Oman announced on Saturday that culture minister Haitham bin Tariq Al Said has been named as the new ruler of the Arabian country and the successor to longtime ruler Sultan Qaboos. The announcement came as Omanis lined the streets of the capital, Muscat, to catch a glimpse of the motorcade carrying the body of Sultan […]

The U.S. will not renew exemptions from its sanctions for importing oil from Iran, U.S. Secretary of State Mike Pompeo announced on Monday. The exemptions were granted last November for a 180-day period for India and seven other countries, and are due to expire on May 2. Pressure campaign “Today we are announcing the United […]