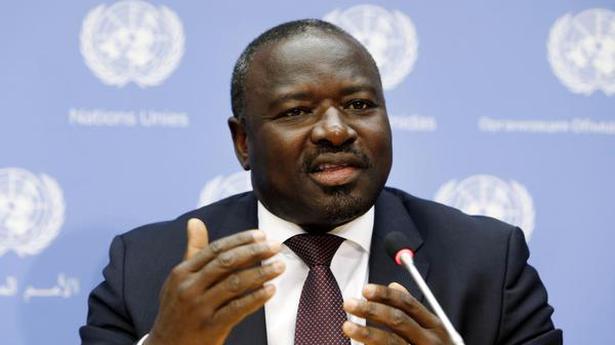 The head of the U.N.’s nuclear test ban treaty organisation says that in his “wild dreams,” very young children around the world will be taught that nuclear testing isn’t good — and that the world should be free of nuclear weapons.

In an interview on the sidelines of the annual gathering of world leaders at the U.N. General Assembly, Lassina Zerbo said he started a nine-member youth group three years ago with that aim. It has grown to 780 today, and they come from all over.

“Fortunately, we started before Greta Thunberg,” he said, laughing, referring to the 16-year-old Swedish activist who has become the world’s best-known campaigner against climate change. He said even very young children should be brought into the anti-nuclear campaign.

“In my wild dreams,” Mr. Zerbo said on Thursday, “we have to take kids when they start talking and then put in their mouth, in their brain, that nuclear testing isn’t good, and that we want a world free of nuclear weapons.” Mr. Zerbo said more “innovative ways” are also needed to get the Comprehensive Nuclear Test Ban Treaty, or CTBT, to enter into force.

The General Assembly adopted the treaty in 1996. It has been signed by 184 countries and ratified by 168. But it cannot enter into force until it is ratified by eight countries that had nuclear-power reactors or research reactors in 1996 — the United States, China, Iran, Israel, Egypt, India, Pakistan and North Korea.

Mr. Zerbo expressed hope for “a conclusive outcome” to talks between U.S. President Donald Trump and North Korean leader Kim Jong-un. Any agreement, he said, “should include their signature and ratification” of the comprehensive test-ban treaty. “Because if they agree to a moratorium on nuclear testing, that could be the first step” toward implementation.

But at the moment, Mr. Zerbo said, asking North Korea to be an observer to the treaty could be a step to building trust to bring them to the negotiating table.

While Pakistan hasn’t signed the treaty, Mr. Zerbo said, it is an observer at the organisation. That’s “a small step,” he says, “but it’s an important step in the overall framework for us to reach the entry into force.” India, Pakistan’s neighbour and nuclear-armed rival, isn’t an observer, though the treaty organisation is working on it.

While waiting for the treaty to take effect, the organisation has spent more than $1 billion on a sophisticated international monitoring system that can detect nuclear tests.

It uses four technologies: seismic stations to pick up shock waves from any underground explosion; “hydro-acoustic” monitoring to pick up anything that happens underwater; “infrasound” stations to detect low-frequency waves in the atmosphere that can travel long distances; and “radionuclide” stations to sample the air for radiation.

The monitoring stations have detected all of North Korea’s nuclear tests as well as earthquakes, tsunamis, air contamination, the movement of whales, the trajectory of space launches and meteors. The treaty organisation also detected the location where an Argentine submarine that disappeared in 2017 was found almost a year later, Mr. Zerbo said.

There are now over 300 monitoring stations, he said, and “it is our hope that India will consider hosting a station.” This would automatically give India observer status at the treaty organisation.

Mr. Zerbo, a candidate to head the International Atomic Energy Agency, was at the United Nations to speak at an event on the sidelines of the General Assembly on the entry into force of the test ban treaty. He said there is growing frustration that 23 years after the treaty was adopted, it still hasn’t taken effect despite wide support.

“And people feel that if we can’t secure this low-hanging fruit,” he said, “it will be more and more difficult for us to move in any other agreement in arms control, nonproliferation and disarmament.” He said one of the big challenges today is to “bridge the gap” among international organisations to get the message across that they all have one goal — a world without nuclear weapons. And that points right back to his dreams.

In those dreams, Mr. Zerbo said, there would be “a 2- or 3-year-old child — because they speak quite quick today — who says to the media or says to the TV: ‘I don’t want nuclear testing anymore.’”