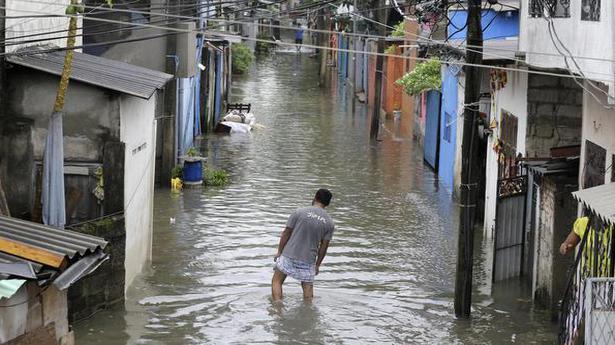 One person died and over 45,000 people have been affected in flash floods in Sri Lanka, following incessant rains in the island over the past two days.

One person was reported dead in the southern district of Galle, and thousands across Sri Lanka’s Southern and Western provinces have been affected and displaced, according to a spokesman of the Disaster Management Centre. “We have issued landslide warnings in certain areas, because this rain and volume at this time is unexpected,” Pradeep Kodippili told The Hindu on Tuesday.

Over 100-mm rainfall was recorded in several districts, and upto 200-mm has been predicted by the Meteorological Department in the next two days.

Sri Lanka has two main monsoons — Southwest (May to September) and Northeast seasons (December to February), supplemented by two inter-monsoons in March-April and October-November. The current spell, according to officials, is not a scheduled one and its high volume has affected thousands of people.

Parts of Sri Lanka have experienced recurring floods in recent years, even as some areas were affected by droughts. Nearly 100 people died in 2017, in floods that hit southern districts. In December last year, some 50,000 people, mostly in the northern province, were affected by floods after a dry spell that had badly hit the agriculture sector in the region.

European Council President Charles Michel on Friday called an EU leaders’ videoconference for April 23 to discuss how Europe can pick itself up from the economic damage caused by the coronavirus pandemic. “It is time to lay the ground for a robust economic recovery,” he said in a statement a day after EU Finance Ministers […]

The grim milestone came on the same day as global coronavirus cases exceeded 50 million. The United States became the first nation worldwide since the pandemic began to surpass 10 million coronavirus infections, according to a Reuters tally on Sunday, as the third wave of the COVID-19 virus surges across the nation. The grim milestone […]