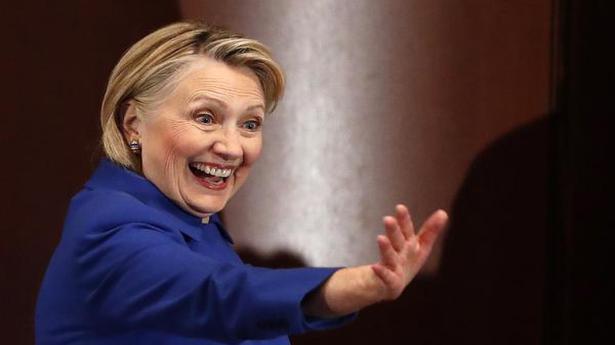 Newly arrested WikiLeaks founder Julian Assange needs to “answer for what he has done,” Hillary Clinton has said.

The 2016 Democratic presidential nominee and former secretary of state weighed in on Assange while at a speaking event on Thursday with her husband, former President Bill Clinton.

Assange was arrested earlier on Thursday at the Ecuadorian Embassy in London, and the US has charged him with conspiring with former Army intelligence analyst Chelsea Manning to break into a classified government computer at the Pentagon.

US President Donald Trump, Clinton’s Republican opponent, frequently showered praise on Assange during the final weeks of the campaign and cheered on the release of damaging emails from Clinton’s campaign manager, John Podesta.

Assange was arrested after Ecuador revoked the political asylum that had kept him holed up at the embassy for nearly seven years. The US is seeking Assange’s extradition.

Ms. Clinton said on Thursday, “The bottom line is that he has to answer for what he has done, at least as it has been charged.”

In a tongue-in-cheek nod to Trump’s travel ban on citizens from Muslim-majority nations, Clinton added, “I do think it’s a little ironic that he’s the only foreigner this administration would welcome to the United States.”

Japanese media reports say police are investigating a knife that was placed on the school desk of Emperor Akihito’s grandson. The incident involving 12-year-old Hisahito, who is in succession line for the Chrysanthemum Throne, comes as Japan prepares for ceremonies marking Akihito’s abdication on April 30. Kyodo News says police are investigating security camera footage. […]

Have no hatred towards mosque gunman: Husband of slain woman

A man whose 44-year-old wife was killed in the Christchurch mosque attack as she rushed back in to rescue him said he harbours no hatred toward the gunman, insisting forgiveness is the best path forward. “I would say to him ‘I love him as a person’,” Farid Ahmad told AFP. Asked if he forgave the […]

Attorney-General William Barr believes the Russia investigation that shadowed President Donald Trump for the first two years of his administration was started without any basis and amounted to an effort to “sabotage the presidency”. Mr. Barr offered no support for his assertion that the FBI lacked a basis for opening the investigation and made no […]