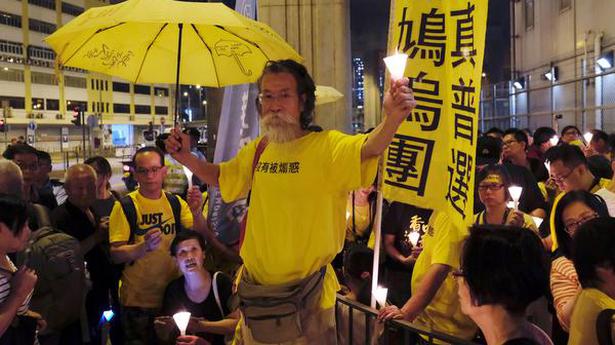 Four prominent leaders of Hong Kong’s democracy movement were jailed on Wednesday for their role in organising mass protests in 2014 that paralysed the city for months and infuriated Beijing.

The prison terms are the latest hammer blow to the city’s beleaguered democracy movement which has seen key figures jailed or banned from standing as legislators since their demonstrations shook the city but failed to win any concessions.

Nine activists were convicted earlier in April of at least one charge in a prosecution that deployed rarely used colonial-era public nuisance laws over their participation in the Umbrella Movement protests, which called for free elections to appoint the city’s leader.

Their trial renewed alarm over shrinking freedoms under an assertive China which has rejected demands by Hong Kong protesters for a greater say in how the financial hub is run.

The jail terms are the steepest yet for anyone involved in the 79-day protest which vividly illustrated the huge anger — particularly among Hong Kong’s youth — over the city’s leadership.

Committed to deal with U.S.: Taliban

Its leader urges America ‘not to waste’ the opportunity to end war in Afghanistan. Source: thehindu.com Related

Two columns of the Army were deployed in Guwahati and in Kanchanpur and Manu areas of Tripura on Wednesday as protests against the Citizenship (Amendment) Bill (CAB), 2019, continued for the second day. Voting began for the third of the five-phase polling in 17 assembly constituencies of Jharkhand on December 12. The voting began at 7 a.m. […]