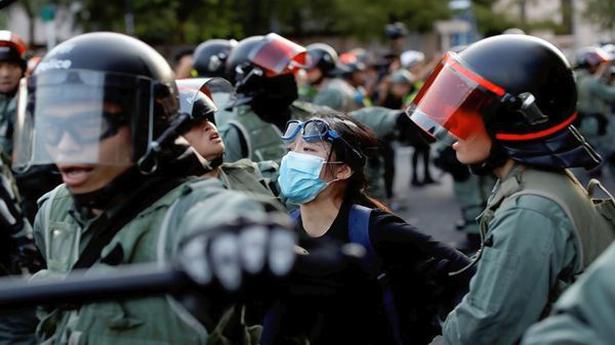 Pro-democracy protesters clashed with riot police outside a mall on Sunday, with some activists vandalising a nearby subway station and defacing a Chinese flag, but plans to disrupt the airport did not materialise.

Police fired brief volleys of tear gas and rubber bullets in the northern town of Sha Tin late Sunday afternoon, capping a day which saw thousands rally peacefully inside a mall before the mood soured.

Authorities reduced rail and bus links to the city’s airport while police stepped up security checks in a successful bid to stop a crowd from massing at the bustling transport hub.

The airport — the world’s eighth busiest — has become a frequent target for demonstrators pushing for greater democratic rights and police accountability.

Online forums used by the largely leaderless movement had called for a “stress test” of the airport on Sunday, code for disrupting travel links or occupying buildings.

Instead thousands gathered inside a mall in the northern town of Sha Tin to sing protest songs and make origami cranes, the latest rally in what has now been 16 consecutive weekends of protests and clashes.

Many shops inside the complex shuttered but the unsanctioned rally remained civil for much of the afternoon.

“Even if we are very tired, we can’t give up on our rights,” a teacher at the rally, who have her surname as Ching, told AFP.

Tensions rose later in the afternoon.

Masked activists paraded a Chinese flag through the mall that had been torn down from a nearby government building. It was later thrown into a nearby river.

Groups of masked protesters then vandalised ticket machines in Sha Tin’s subway before riot police rushed in to close the station down.

Interactive: Richest people on the planet

A barber’s association in a northern Bangladesh town has warned its members not to give “foreign” haircuts or beard styles on pain of fines, an official said on Thursday. An association order has been hung up at every barber shop in the town of Bhuapur in the conservative Muslim-majority South Asian nation of 165 million […]