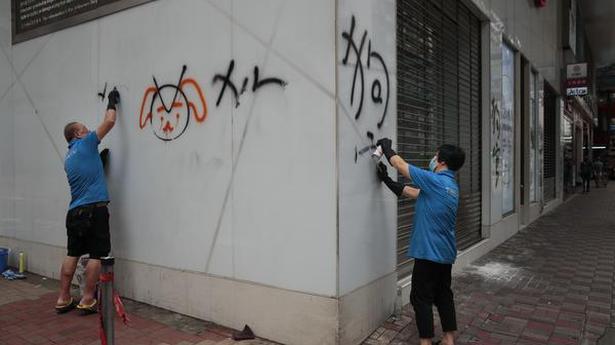 Hong Kong activists called off protests on Wednesday in remembrance of the September 11, 2001 attacks on the United States and denounced a Chinese state newspaper report as ‘fake news’ that they were planning ‘massive terror’ in the Chinese-ruled city.

Hong Kong has been rocked by months of sometimes violent unrest, prompted by anger over planned legislation to allow extraditions to China, but broadening into calls for democracy and for Communist rulers in Beijing to leave the city alone.

“Anti-government fanatics are planning massive terror attacks, including blowing up gas pipes, in Hong Kong on September 11,” the Hong Kong edition of the China Daily said on its Facebook page, alongside a picture of the hijacked airliner attacks on the twin towers in New York.

“The 9/11 terror plot also encourages indiscriminate attacks on non-native speakers of Cantonese and starting mountain fires.” The post said “leaked information was part of the strategy being schemed by radical protesters in their online chat rooms”.

The former British colony of Hong Kong returned to China in 1997 under a ‘one country, two systems’ formula that guarantees freedoms not enjoyed on the mainland, including an independent legal system, triggering the anger over the extradition bill.

Hong Kong leader Carrie Lam has said she will withdraw the bill but many Hong Kong residents fear Beijing is steadily eroding the autonomy of the Asian financial hub.

China denies meddling and has accused the United States, Britain and others of fomenting the unrest.

“We dont even need to do a fact check to know that this is fake news,” said one protester, Michael, 24, referring to the China Daily post. “The state media doesnt care about its credibility. Whenever something they claimed to have heard on WhatsApp or friends friends, they will spread it right away.”

The protesters called off action on Wednesday.

“In solidarity against terrorism, all forms of protest in Hong Kong will be suspended on Sept. 11, apart from potential singing and chanting,” they said in a statement.

The China Daily report was worrying, said another protester, Karen, 23. “When they try to frame the whole protest with those words, it alarms me,” she said. “They are predicting rather than reporting. I think people calling it off today is a nice move.”

The chairwoman of the Hong Kong Federation of Women, Pansy Ho, a prominent businesswoman and daughter of Macau casino operator Stanley Ho, said she was worried about violent extremism.

“Children of all ages are indoctrinated with police hatred and anti-establishment beliefs at school and online mobilised to conduct massive school strikes,” she told the U.N. Human Rights Council in Geneva.

Lam said in a speech on Wednesday that Hong Kong was grappling with significant challenges.

“My fervent hope is that we can bridge our divide by upholding the one country, two systems principle, and the Basic Law, and through the concerted efforts of the government and the people of Hong Kong,” she told business leaders.

Hong Kong airline Cathay Pacific Airways Ltd has become the biggest corporate casualty of the unrest after China demanded it suspend staff involved in, or who support, the protests.

Cathay Pacific said on Wednesday inbound traffic to Hong Kong in August fell 38% and outbound traffic 12% compared with a year earlier, and that it did not anticipate September to be any less difficult.

Joshua Wong, one of the prominent leaders of the 2014 ”Umbrella” pro-democracy movement which brought key streets in Hong Kong to a standstill for 79 days, said in Berlin that the fight for democracy was an uphill battle.

“I hope one day not only Hong Kong people, but also people in mainland China, can enjoy freedom and democracy,” he said.

The protests spread to the sports field on Tuesday, as many football fans defied Chinese law to boo the national anthem ahead of a soccer World Cup qualifier against Iran.

Several peaceful protests are planned for the next few days, combining with celebrations marking the Mid-Autumn Festival.

Calm broken as clashes break out in Hong Kong malls

Hong Kong police used pepper spray and made multiple arrests on Sunday as small groups of black-clad pro-democracy protesters targeted some of the city’s malls, ending a rare lull in violence. Flashmob protests and vandalism broke out in multiple locations, prompting riot police to use pepper spray and make arrests in at least two shopping […]

Jeff Bezos, CEO of Amazon and the world’s richest man, said he was committing $10 billion to a new fund to tackle climate change. In a post to his 1.4 million followers on Instagram on Monday, the e-commerce tycoon said the Bezos Earth Fund would “fund scientists, activists, NGOs— any effort that offers a real […]

Amazon.com Inc on November 25 said it will open a pop-up store on Chinese e-commerce platform Pinduoduo Inc that will run until the end of December and carry a selection of about 1,000 products from overseas. The move, which was initially reported by Reuters on November 24, points to how the U.S. firm’s China strategy […]