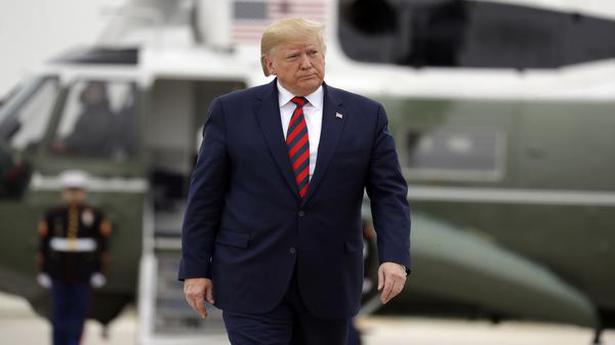 In a change in strategy, the Speaker of the U.S. House of Representatives, Nancy Pelosi, announced that the House will hold a formal vote on the impeachment inquiry. The vote, which is planned for Thursday, comes some five weeks after House Democrats launched an inquiry into whether U.S. President Donald Trump had violated his oath of office by pressuring Ukraine’s President to investigate Mr Trump’s political opponents.

Members of the House will now have to go on record with where they stand on the impeachment — a politically risky situation for House Democrats who are from districts with a thin Democratic majority, one of the reasons why Ms. Pelosi had been hesitant to hold such a vote in the first place.

The move also comes in the face of the Trump administration insisting that the ongoing inquiry is not constitutionally valid having not been put to vote. White House Counsel Pat Cipollone had written to Democratic leaders in the House and Ms. Pelosi in early October, saying the White House would not cooperate with the inquiry. Some State Department officials have defied the White House’s order not to testify.

A federal court last week had, however, ruled that the inquiry was legal. Nevertheless, Ms. Pelosi is not taking any chance. “We are taking this step to eliminate any doubt as to whether the Trump Administration may withhold documents, prevent witness testimony, disregard duly authorized subpoenas, or continue obstructing the House of Representatives,” Ms. Pelosi said on Monday in a letter to her Democratic colleagues that was released by her office.

The House Resolution posted on Ms. Pelosi’s website read: “Directing certain committees to continue their ongoing investigations as part of the existing House of Representatives inquiry into whether sufficient grounds exist for the House of Representatives to exercise its Constitutional power to impeach Donald John Trump, President of the United States of America, and for other purposes.”

“This resolution establishes the procedure for hearings that are open to the American people, authorizes the disclosure of deposition transcripts…and sets forth due process rights for the President and his Counsel,” Ms Pelosi said, suggesting that the next phase is likely to involve witnesses testifying in open session.

According to the U.S. Constitution, the House has the “sole power” to impeach a President, and if impeached, a President is tried by the Senate and removed only if convicted there. The President is likely to be impeached given that the Democrats have a 234-197 majority over the Republicans.

The Republicans introduced a resolution in the Senate last Thursday condemning the House inquiry. On Monday, the White House and Republicans on Capitol Hill criticised the planned vote.

“Speaker Pelosi is finally admitting what the rest of America already knew — that Democrats were conducting an unauthorized impeachment proceeding, refusing to give the President due process, and their secret, shady, closed door depositions are completely and irreversibly illegitimate,” White House Press Secretary Stephanie Grisham said in a statement.

However, Mr. Trump reacted differently, asking his colleagues on the Hill to focus on the case itself rather than the process. “I’d rather go into the details of the case rather than process,” Mr. Trump told reporters on Monday. “Process is good but I think you ought to look at the case.”

The National Security Council’s Ukraine expert, Lt. Colonel Alexander Vindman, testified on Tuesday before the House panel, in a closed-door session. Several U.S. media outlets had obtained versions of Mr. Vindman’s opening remarks and reported that he was planned to say he had heard Mr. Trump requesting the Ukrainian President to investigate a rival, and he [Mr. Vindman] was so disturbed by it that he reported it to a superior.

Indo-Pak ties in 2019: From brink of war to corridor of peace

Pakistan and India were almost on the brink of war in 2019 following the Pulwama terror attack that killed dozens of CRPF soldiers and prompted India to carry out air strikes on terror camps in Pakistan, but the year ended on a somewhat positive note as they inaugurated a historic corridor to facilitate the visa-free […]

The report expands on Trump’s tough rhetoric in hopes that it will resonate with voters angry at China Source: thehindu.com Related

A promotional video published by Saudi Arabia’s state security agency categorises feminism, homosexuality and atheism as extremist ideas, even as the conservative Muslim kingdom seeks to promote tolerance and attract foreigners. The animated clip posted on Twitter at the weekend by a verified account of the State Security Presidency said “all forms of extremism and […]