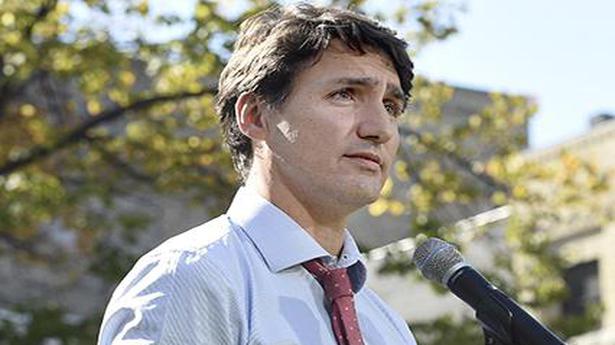 Canadian Prime Minister Justin Trudeau acknowledged that he let down his supporters and all Canadians of colour by appearing years ago in brownface and blackface. Yet the scandal’s fallout may be limited in a country without the harsh and still-divisive racial history of the neighbouring U.S. “I hurt people who in many cases consider me an ally,” Mr. Trudeau told a news conference Friday. “I let a lot of people down.”

Mr. Trudeau, 47, is seeking a second term as Prime Minister in an October 21 election. His leading opponent, Andrew Scheer of the Conservative Party, has assailed him as “not fit to govern” because of the revelations. But key figures in the Prime Minister’s Liberal Party have stuck by him, including Foreign Minister Chrystia Freeland, who would be a favourite to replace Mr. Trudeau as Liberal leader if he lost the election.

Many minority Canadians, increasingly active in politics and government, seem ready to forgive Mr. Trudeau. “As I have gotten to know Justin, I know these photos do not represent the person he is now, and I know how much he regrets it,” Defense Minister Harjit Sajjan said on Twitter.

According to recent census figures, Canada’s population is about 73% white, compared with 77% in the U.S. Many of the nonwhites in Canada are from Asia. Only about 3.5% of the population is black.

In Mr. Trudeau’s multiethnic district of Montreal, some residents questioned about the scandal offered a collective shrug. “It was no big deal, it was a long time ago,” said Zahid Nassar, an immigrant from Pakistan. “When we’re young, we all do stupid things.”

“I have been forthright about the incidents that I remembered,” said Mr. Trudeau on Friday. “I did not realise at the time how much this hurt minority Canadians, racialised Canadians.”

Mr. Trudeau was later asked on whether his standing internationally will be damaged. “My focus is Canadians who face discrimination every day,” he replied. “I’m going to work very hard to demonstrate as an individual and as a leader I will continue to stand against intolerance and racism.”

The death toll from violent unrest in Chile rose to 23 on Friday as the country entered its fifth week of social unrest. Looting and demonstrations took place in cities across the South American nation, and an agreement on a political roadmap that will see Chile draft a new constitution has halted neither the anger, […]

Two Indian battle ships, including the biggest indigenously built stealth destroyer INS Kolkata, have arrived at the port city of Qingdao to take part in the Chinese Navy’s fleet review while the Pakistan naval ships will be conspicuous by their absence at the event. China’s People’s Liberation Army Navy (PLAN) is celebrating its 70th founding […]

Saudi Arabia released images of King Salman carrying out his royal duties on Sunday, after a stunning purge of at least two Princes, including his brother and nephew for allegedly plotting a coup. Saudi royal guards on Friday detained the trio in a move that signals Crown Prince Mohammed bin Salman’s tightening grip on power. […]