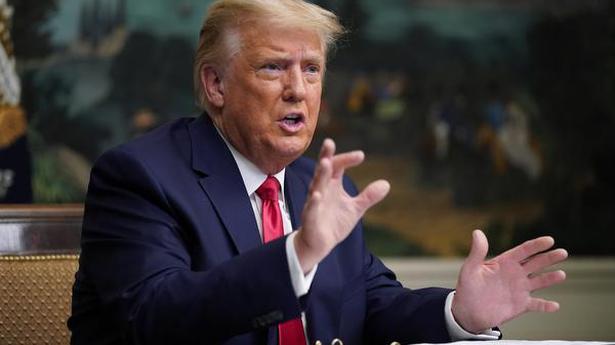 Mr. Trump still refuses to publicly concede his defeat on November 3, forcing him from office after one term.

Still irate and bitter one month after his election defeat to Joe Biden, Donald Trump is openly musing about a second run at the U.S. presidency in 2024.

Refusing to accept defeat, Mr. Trump’s lawyers and supporters continued on Wednesday to file lawsuits and even call for extraordinary intervention, such as martial law, to force a new vote.

And Mr. Trump released an extraordinary 46 minute video in which he again claimed that he was robbed of victory in a “rigged” election.

But at a White House Christmas party on Tuesday, the President suggested he might have lost this battle, but would not retire quietly as a one-term President.

“It’s been an amazing four years. We are trying to do another four years. Otherwise, I’ll see you in four years,” he told guests.

The comment was perhaps the closest the 74-year-old Mr. Trump has come to admitting his quixotic, month-long quest to reverse Mr. Biden’s win has failed.

On Tuesday, Attorney General Bill Barr declared that the Justice Department had found no significant evidence of fraud in the election.

Mr. Biden meanwhile continued to prepared for taking office on January 20, telling The New York Times in an interview how he plans to revive the economy.

“I want to make sure we’re going to fight like hell by investing in America first,” Mr. Biden said.

Mr. Trump still refuses to publicly concede his defeat on November 3, forcing him from office after one term.

He has remained shuttered in the White House, limiting his public appearances, and apparently holding few official meetings, while issuing furious tweets about alleged election fraud.

But according to media reports he is preparing his exit, holding discussions about issuing preemptive pardons for his three adult children — Don Jr, Eric and Ivanka — for Ivanka’s husband Jared Kushner, and his own personal lawyer Rudy Giuliani.

On Wednesday he released on Twitter a formal address on the election.

“This may be the most important speech I’ve ever made,” he began.

He recited a litany of complaints about the election, saying the Democrats used the COVID-19 crisis to force widespread use of mailed ballots, which he said were fraudulently manipulated to support Mr. Biden.

“This election was rigged, everybody knows it,” he said. “It is statistically impossible that the person, me, who led the charge, lost.”

“We have so much evidence,” Mr. Trump said.

Supporters continued to fight against the results. Mr. Giuliani appeared before Michigan’s State legislature on Wednesday to present his claims of irregularities.

In Georgia, another lawyer tied to the Trump campaign, Sidney Powell, spoke to a rally of supporters claiming their votes were not counted.

But Mr. Barr’s statement on Tuesday, in a break with the President, went far to undermine their claims.

“To date, we have not seen fraud on a scale that could have effected a different outcome in the election,” he said.

‘Someone’s going to get shot’

The campaign to delay and litigate the election results, though, was turning in discomfiting directions.

Mr. Trump’s immediate plans were to head to Georgia on Saturday to campaign beside the two Republican Senate candidates, key to the party retaining control of the U.S. Senate.

But beyond that, when he might openly accept his loss, or map out his post-presidency plans, remained unknown.

According to NBC News, Mr. Trump has discussed the possibility with his close aides of launching his 2024 campaign on January 20, the day Mr. Biden is to be inaugurated as President.

In theory, nothing prevents another run. The U.S. Constitution restricts Presidents to two four-year terms, but does not require they be consecutive.

But only one President did so: Grover Cleveland, in the late 19th century.

The real estate tycoon faces the challenge of losing the center of attention, and his grip on the Republican Party, as Washington turns to the Biden administration. Yet he retains strong support among voters, who could continue to rally behind him and make him a continuing force in Republican politics.

Hong Kong police raided a private office of pro-democracy media mogul Jimmy Lai on Thursday as part of their investigation into whether he has broken Source: thehindu.com Related

The move by the President is seen as a goodwill gesture to boost participation in the upcoming election. Source: thehindu.com Related

Watch | The COVID-19 pandemic leads to a bicycle boom

A video on the increasing demand for bicycles around the world over the past two months Source: thehindu.com Related