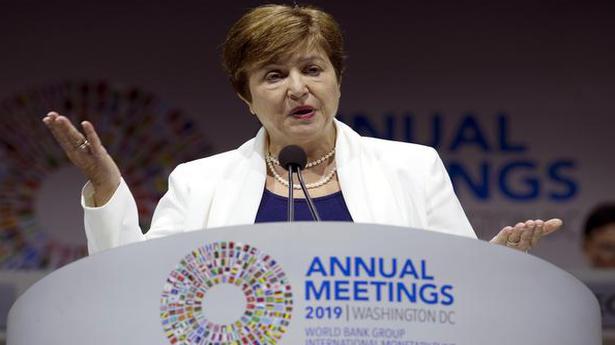 At a time when multilateral institutions stand on increasingly shaky ground, members of the International Monetary Fund (IMF) agreed to maintain its funding at $1 trillion but postponed changes to its voting structure.

The deal is a compromise with the U.S., the Fund’s largest shareholder, which has resisted changes to the organisation’s voting structure as well as increases in its permanent resource base.

Friday’s deal will allow an extension of non-permanent, supplementary sources of funds — such as the New Arrangement to Borrow (NAB), a renewable funding mechanism that has existed since 1998, and bilateral borrowings from countries — the IMF had entered into after the 2008 financial crisis to increase its lending ability.

The agreement extended the bilateral borrowing facility by a year —to the end of 2020 — and a potential doubling of the NAB.

“We look forward to consideration of a doubling of the New Arrangement to Borrow and a further temporary round of bilateral borrowing beyond 2020,” the International Monetary and Finance Committee (IMFC) , a body that advises the IMF’s Board of Governors, said via a statement released on Friday.

“I welcome this high-level endorsement, which demonstrates the strong support for our membership for the Fund’s mission,” IMF Managing Director Kristalina Georgieva said. “We will continue to work closely with our membership in the period ahead to ensure full implementation of this package.”

No change in quotas

Specifically, the agreed package will leave IMF quotas (the primary source of IMF funds), which determine voting shares, unchanged. Instead, these will be reviewed before the end of 2023.

IMF quotas are distributed according to a four pronged formula that considers a member country’s GDP, its economic openness, its “economic variability” and international reserves.

Some IMF members have become frustrated with the pace of governance reforms, as the balance of economic and geopolitical power has shifted, becoming more dispersed across the world, particularly with the emergence of China and India — among the world’s largest and fastest growing economies.

India’s quota is 2.76% and China’s is 6.41%, while the U.S.’s quota is 17.46 % (translates to a vote share of 16.52%) giving it a unique veto power over crucial decisions at the IMF, many of which require a supermajority of 85%. The U.S. has resisted diluting its share, wary that it will benefit countries such as China.

Quotas are supposed to be reviewed every five years although these reviews can be delayed — as was the case with the 14th review. That process, completed in 2010, needed approval of the U.S. Congress, and it was not closed out till early 2016. The review’s outcomes included a doubling of the quota total and a shift in some voting rights to under-represented and emerging market countries. India’s vote share increased marginally.

The 15th quota review is currently under way.

“Beyond the 15th Review, we are committed to revisiting the adequacy of quotas and continuing the process of IMF governance reform under the 16th General Review of Quotas, including a new quota formula as a guide, with the Review to be extended from 2020 to no later than December 15, 2023,” the IMFC statement said, emphasising expected changes in quotas for emerging market countries and the Fund’s low income countries.

“In this context, we remain committed to ensuring the primary role of quotas in IMF resources. Any adjustment in quota shares would be expected to result in increases in the quota shares of dynamic economies in line with their relative positions in the world economy and hence likely in the share of emerging market and developing countries as a whole, while protecting the voice and representation of the poorest members,” the statement said.

In Ecuador, a nighttime crypt visit for the morbidly curious

It’s a chilly night in Ecuador’s capital and the small group of men and women visiting the city’s oldest cemetery are understandably nervous. Led by guides in black hooded capes, they navigate a maze of crypts as voices call out existential questions into the night. “What are you doing so that someone remembers you after […]

China has reported no new local coronavirus infections for the second consecutive day, but the number of imported COVID-19 cases sharply rose to 67 in a day after the deadly virus was brought under control in its epicentre Wuhan, health officials said on Thursday. China’s National Health Commission (NHC) said on Thursday, while no new […]

Chinese spy defected to Australia with trove of intelligence: report

A Chinese spy has defected to Australia with a trove of intelligence on China’s political interference operations in Hong Kong, Taiwan and elsewhere, according to a media report on Saturday. The Nine network newspapers said the defector, named as Wang “William” Liqiang, had given Australia’s counter-espionage agency the identities of China’s senior military intelligence officers […]