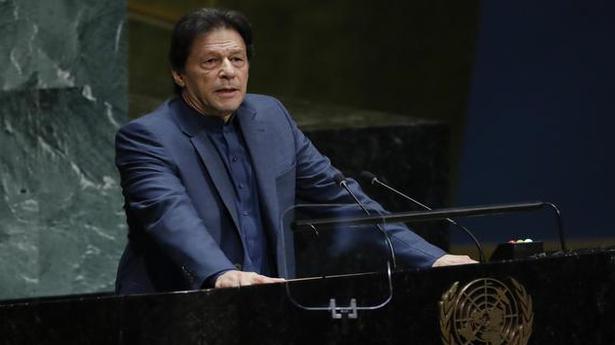 Pakistan Prime Minister Imran Khan on Friday raised the Kashmir issue in his maiden address to the UN General Assembly, and demanded that India lift the “inhuman curfew” in Kashmir and release all “political prisoners”.

In his speech that went on for about 50 minutes, exceeding the 15-minute limit for UN speeches during the general debate, Mr. Khan devoted half of his address to the Kashmir issue, warning that if there was a face-off between two nuclear-armed neighbours, the consequences would be far beyond their borders.

Mr. Khan spoke at length about India’s decision to revoke Article 370 in Jammu and Kashmir, and criticised the government’s move to put in place a communication lockdown.

He said India ended the special status of Jammu and Kashmir, flouting 11 resolutions of the UN Security Council, the Simla agreement and its own Constitution.

“What is the world community going to do? Is it going to appease a market of 1.2 billion, or is it going to stand up for justice and humanity,” the Pakistani Prime Minister asked.

“…This is the time to take action. And number one action must be that India must lift the inhuman curfew” in Kashmir, he said. “It must free all political prisoners,” he added.

He went on to say that the world community must give the people of Kashmir the right to self-determination.

Asserting that the situation in Kashmir will deteriorate once India lifts the curfew, Mr. Khan said, “You hope for the best but be prepared for the worst.”

He said once the curfew is lifted, “there will be a reaction” and India would blame Pakistan.

“Two nuclear-armed countries will come face to face, like we came in February,” he said, a reference to the stand-off between the two nations following the Pulwama terror attack on an Indian police convoy and India’s subsequent air strikes on terror camps in Balakot in Pakistan.

Typhoon Lekima: 45 killed, over a million displaced in China

The strongest typhoon to hit China this year has killed at least 45 people, state-media reported on Monday, as authorities stepped up rescue efforts to locate 16 missing people after the storm displaced more than a million residents. Lekima, the ninth typhoon, hit Wenling city on Saturday afternoon, packing winds of 187 kilometers per hour […]

Health facilities near Tripoli have reported 47 people killed and 181 wounded in recent days as eastern forces seek to take Libya’s capital from an internationally-recognised government, the United Nations’ health body said on Tuesday. The renewed conflict in a nation splintered since the 2011 toppling of Muammar Gaddafi also risks depleting medical supplies, the […]

Taiwan President Tsai Ing-wen has named as her running mate for 2020 elections a former premier who angered Beijing so badly last year with his support for the island’s formal independence that a major Chinese paper called for his arrest. Self-ruled and democratic Taiwan is claimed by China as a wayward province and is the […]