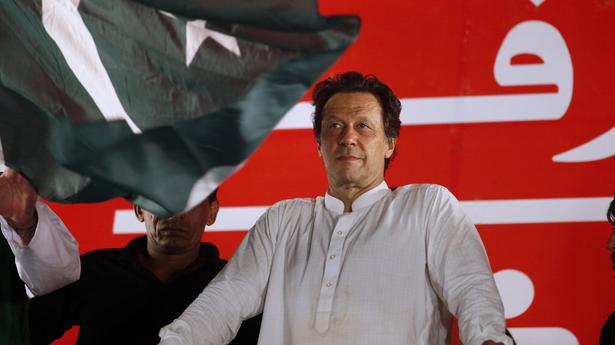 Pakistan Prime Minister Imran Khan said he thinks there may be a better chance of peace talks with India if Prime Minister Narendra Modi’s Bharatiya Janata Party (BJP) wins the general election due to begin on April 11.

Mr. Khan said that if the next Indian government were led by the opposition Congress party, it might be too scared to seek a settlement with Pakistan over Kashmir, fearing a backlash from the right.

“Perhaps if the BJP — a right-wing party — wins, some kind of settlement in Kashmir could be reached,” Mr. Khan told a small group of foreign journalists in an interview.

This was despite the massive alienation that Muslims in Kashmir and Muslims in general were facing in Modi’s India, said Mr. Khan. “I never thought I would see what is happening in India right now…Muslim-ness is being attacked.” Mr. Khan said Indian Muslims he knew who many years ago had been happy about their situation in India were now very worried by extreme Hindu nationalism.

He said Mr. Modi, like Israeli Prime Minister Benjamin Netanyahu, was electioneering based on “fear and nationalist feeling”.

The BJP’s pledge this week to propose stripping decades-old special rights from the people of Jammu and Kashmir, which prevent outsiders from buying property in the state, was a major concern, though it could also be electioneering, Mr. Khan said.

Mr. Khan did appear to offer India an olive branch, saying that Islamabad was determined to dismantle all Pakistan-based militias in the country, and that the government had full support from Pakistan’s powerful army for the programme. Those to be dismantled include groups involved in Kashmir. Nuclear-armed neighbours Pakistan and India both claim Kashmir in full but rule in part.

Mr. Khan said Kashmir was a political struggle and there was no military solution, adding that Kashmiris suffered if armed militants from Pakistan came across the border, leading to Indian army crackdowns.

Relations between Pakistan and India, which have fought three wars since gaining independence from Britain in 1947, two over Kashmir, reached a crisis point in February after a suicide bombing killed 40 Indian paramilitary police in Kashmir. Islamabad denied responsibility for the February 14 attack, which was claimed by Pakistan-based militant group Jaish-e-Mohammed, but the bombing prompted India to carry out a cross border air strike against what it said was a militant training camp in Pakistan. Pakistan responded with air strikes of its own.

Pollsters say Mr. Modi and the BJP’s re-election bid got a boost from a wave of patriotism after the suicide bomb attack and the Indian government’s fast response.

Mr. Khan said there was still the possibility if the polls turn against Mr. Modi in the next few weeks that India could take some further military action against Pakistan.

Mr. Khan said that it was vital for Pakistan to have peace with its neighbours, Afghanistan, India and Iran, if it was to have the kind of economy needed to pull 100 million people out of poverty.

The US Centers for Disease Control and Prevention (CDC) on Monday announced a second case of transmission of the new coronavirus within the United States and provided more detailed plans on how it will handle travelers returning from China as the country works to limit the outbreak. “We expect to see more cases of person-to-person […]

The UN Security Council on Tuesday unanimously approved a United States’ resolution on the recent deal between the U.S. and the Afghan Taliban, a rare endorsement of an agreement with a militant group. The U.S. military has begun withdrawing troops as part of the pullout agreed in the February 29 pact with the Taliban. Also […]

A Belarusian woman who was trying to hike to an abandoned bus at the edge of Denali National Park in Alaska made famous in the book and movie Into the Wild died after being swept away in a river, state troopers said on Friday. Veramika Maikamava, 24, was pulled underwater when she tried to cross […]