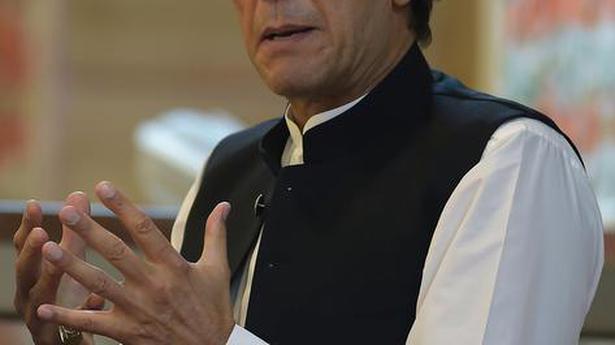 Mr Khan said he would be the Ambassador of Kashmir at all international forums and raise his voice for hapless Kashmiris.

Comparing the ideology of the Rashtriya Swayamsevak Sangh (RSS) to Nazism, Mr Khan spoke of a battle of ideologies.

“Now the world is looking at Kashmir and also Pakistan. We will internationalise the issue of Kashmir. The world must understand how dangerous RSS ideology is…the kind of statements coming out regarding Kashmiri women is the result of sick-minded ideology,” he said.

The Prime Minister said even those Kashmiri leaders who were considered pro-India are saying today that Jinnah was right.

“The genie of RSS will not go back in the bottle. After Muslims, it will target Sikhs, Dalits, Christians.”

“This will not stop at Kashmir. It will come towards Pakistan. We have information — we have had two NSC meetings and the Pakistan Army knows this — that they [India] have planned to take action in AJK like they did in Balakot after Pulwama. According to our information, this time it will be much worse and dangerous,” Mr Khan said.

“They want to do this to divert the world’s attention from what they’re doing in Kashmir. I want to send a message to Narendra Modi that if you take any such action, we will answer with full force. Our army is battle-hardened. We are ready. And it’s not just the army, the entire Pakistani nation is ready to fight alongside our army,” he said.

PM Khan said he is a pacifist who doesn’t want war but it it happens, we are ready. “We will fight till the end.”

Prime Minister Khan said Prime Minister Modi had betrayed Kashmiris by revoking Article 370. “This is a miscalculation by Narendra Modi. You will see its consequences in the coming days.”

“We have been giving this message to the international community that if a war takes place now, they will be responsible for it. Institutions were made to stop wars so this will be on them. It’s a trial of the United Nations. Will the UN stand with Kashmir when its own resolutions are being violated,” Mr Khan said.

Mr. Khan said Pakistan will go to the ICJ. “We will tell the world that they are responsible for all the atrocities that are being committed in Kashmir.”

Mr. Modi has made a strategic blunder. “This is the final card that he has played. Now Kashmir will only go for azaadi[freedom] after this,” he said.

Australia’s conservative government used a A$100 million ($69 million) sport development fund to target votes in marginal electorates ahead of an election last year, the country’s independent auditor of public spending has concluded. Australia’s Prime Minister Scott Morrison secured re-election in May 2019, defying polls that had indicated voters would punish the conservative government for […]

Disruptions in domestic food supply chains are a pressing issue as the COVID-19 pandemic unfolds, World Bank President David Malpass told reporters on a tele-briefing on Friday. Labour shortages are impacting logistics and loss of jobs and income has impacted people’s ability to afford food, he said. Also read: How the coronavirus crisis is affecting […]