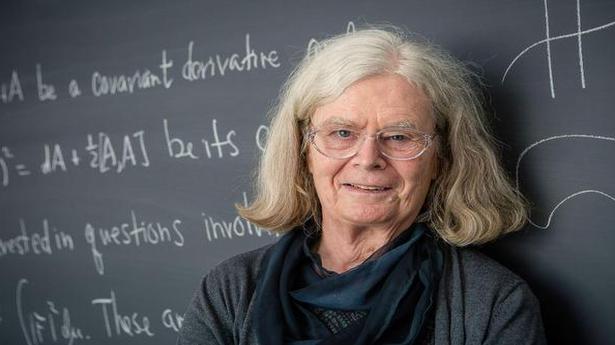 The Abel Prize in mathematics was on Tuesday awarded to Karen Uhlenbeck of the U.S. for her work on partial differential equations, the first woman to win the award, the Norwegian Academy of Science and Letters said.

“Her theories have revolutionised our understanding of minimal surfaces, such as those formed by soap bubbles, and more general minimisation problems in higher dimensions,” he said.

Ms. Uhlenbeck, 76, is a visiting senior research scholar at Princeton University, as well as visiting associate at the Institute for Advanced Study (IAS), both in the U.S.

The Cleveland native “developed tools and methods in global analysis, which are now in the toolbox of every geometer and analyst,” the Academy said.

She is also a role model and a strong advocate for gender equality in science and mathematics.

The prize is named after the 19th century Norwegian mathematician Niels Henrik Abel.

Along with the Fields Medal, which is awarded every four years at the Congress of the International Mathematical Union (IMU), it is one of the world’s most prestigious maths prizes.

A strong aftershock shook Southern California early on Friday as residents were still assessing the damage from the strongest earthquake in the region in 25 years on July 4, which was felt by more than 20 million people. The 5.4 magnitude aftershock, the biggest so far, struck the same desert region as Thursday’s earthquake. Its […]

British Labour leader Jeremy Corbyn called on Boris Johnson on Tuesday to resign and demanded a new election after the Supreme Court ruled that the Prime Minister’s move to suspend Parliament was unlawful. Mr. Corbyn was one of several opposition lawmakers to increase the pressure on Mr. Johnson, whose hardline strategy to take Britain out […]

An advisor to Bangladeshi Prime Minister Sheikh Hasina on Tuesday said the country will take back any citizen of the neighbouring nation staying in India illegally, if evidence is provided. The issue of amended Citizenship Act is an internal matter of India, Advisor to Hasina on international affairs, Gauhar Rizvi, said. “We will take back […]