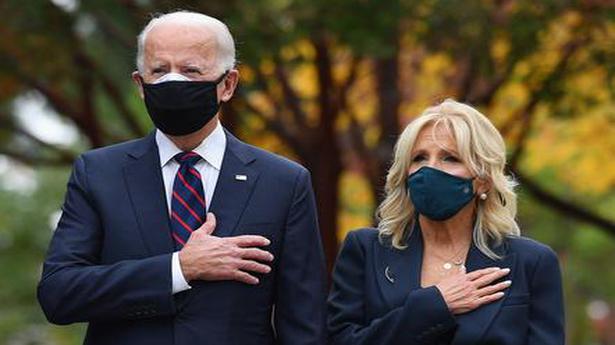 These were congratulatory calls by the three leaders after Mr. Biden’s historic win in the November 3 elections.

U.S. President-elect Joe Biden in phone calls with the leaders of Australia, Japan and South Korea emphasised on maintaining a secure and prosperous Indo-Pacific region.

According to readouts of the calls issued by his transition team, Mr. Biden on Wednesday spoke over phone with Prime Minister Scott Morrison of Australia, Prime Minister Yoshihide Suga of Japan and President Moon Jae-in of South Korea.

These were congratulatory calls by the three leaders after Mr. Biden’s historic win in the November 3 elections.

In his call with Mr. Morrison, Mr. Biden underscored that the United States and Australia share both values and history, and noted that the two countries have fought side-by-side in every conflict since the World War I.

Mr. Biden said that he looks forward to working closely with Mr. Morrison on many common challenges, including containing the COVID-19 pandemic and guarding against future global health threats; confronting climate change; laying the groundwork for the global economic recovery; strengthening democracy, and maintaining a secure and prosperous Indo-Pacific region.

The President-elect in his phone call with Mr. Suga thanked him for his congratulations and complimented him on his steady leadership amidst a governing transition for Japan, the readout said.

Mr. Biden underscored his deep commitment to the defence of Japan and U.S. commitments under Article V, and he expressed his strong desire to strengthen the U.S.-Japan alliance even further in new areas.

“They discussed the need to cooperate on COVID-19, build resilience against future global health crises, and begin the global economic recovery. They also spoke about their shared commitment to tackle climate change, strengthen democracy around the world, and reinforce the U.S.-Japan alliance as the cornerstone of a prosperous and secure Indo-Pacific region, the readout said.

Mr. Biden in his phone call with Mr. Moon expressed his desire to strengthen the U.S.-South Korea alliance as the linchpin of security and prosperity in the Indo-Pacific region.

He observed that he looks forward to working closely with President Moon on other shared challenges, from North Korea to climate change.

They also discussed the shared values that underpin the U.S.-South Korea alliance as well as their mutual interest in strengthening democracy, according to the readout.

South Korea hunkered down as Typhoon Haishen arrived on the shores of its southern peninsula on Monday, after the powerful storm battered Japan’s so Source: thehindu.com Related