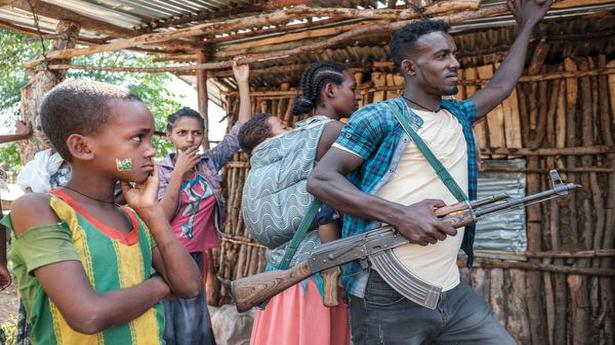 Clashes between federal troops and Tigrayan forces had broken out in eight locations in the region, the U.N. Office for the Coordination of Humanitarian Affairs (OCHA) said.

Nine million people risk displacement from an escalating conflict in Ethiopia’s Tigray region, the United Nations said, warning that the government’s declaration of a state of emergency was blocking food and other aid.

Prime Minister Abiy Ahmed is pressing ahead with a military campaign he announced on Wednesday, despite international pleas to pursue dialogue with the Tigray People’s Liberation Front (TPLF) rather than risk civil war. Tigrayans dominated Ethiopian politics for decades until Abiy took office in 2018 and are fighting his efforts to remove their grip on power.

Clashes between federal troops and Tigrayan forces had broken out in eight locations in the region, the U.N. Office for the Coordination of Humanitarian Affairs (OCHA) said in a report released on Saturday.

Six combatants were killed and more than 60 wounded in fighting near the border between the Tigray and Amhara regions, with casualties on both sides, a humanitarian source told Reuters on Sunday.

The OCHA report said about 600,000 people in Tigray depend on food aid to survive, while another 1 million receive other forms of support, all of which are disrupted.

Abiy won last year’s Nobel Peace Prize for making peace with neighbouring Eritrea after decades of hostility, including a 1998-2000 war that claimed more than 100,000 lives.

His military campaign “aims to end the impunity that has prevailed for far too long”, he said on Saturday. Tigrayans complain of persecution under Abiy, an ethnic Oromo, who ordered the arrest of dozens of former senior military and political officials from the TPLF in a crackdown on corruption. Last year, Abiy reorganised the ruling coalition into a single party that the TPLF refused to join.

Ethiopians should ensure Tigrayans are not victimised “due to their identity”, Abiy wrote on Twitter on Sunday, calling the leaders of Tigray a “greedy junta”.

Experts and diplomats are sounding alarms of a potential civil war that could destabilise the country of 110 million people and the strategic Horn of Africa region.

The federal military’s biggest command, and the majority of its heavy weapons, are stationed in Tigray. One of the biggest risks is that the army will split along ethnic lines, with Tigrayans defecting to their region’s own force. There are signs that is already happening, analysts say.

Tigrayan forces number up to 250,000 men and have their own significant stocks of military hardware, experts say.

“The fragmentation of Ethiopia would be the largest state collapse in modern history,” a group of former United States diplomats said in a statement published by the U.S. Institute of Peace on Thursday. The escalation of the conflict would also kill remaining hope for the democratic reforms Abiy has promised, the statement read.

Abiy spoke on Saturday with U.N. Secretary-General Antonio Guterres, who “offered his good offices”. The U.N. chief also spoke on Saturday to the African Union chief Moussa Faki Mahamat and to Sudanese Prime Minister Abdalla Hamdok in his capacity as chair of the regional Africa group IGAD, according to the U.N. spokesman.

But Abiy is not listening to requests for mediation, diplomats and security officials in the region have told Reuters. He did not issue a statement on the call with the U.N. chief.

Ethiopia’s parliament voted on Saturday to replace the Tigray regional government, another step to deny the legitimacy of the administration elected in September in a poll held in defiance of Abiy’s federal government.

China on Friday said it had taken “reciprocal” measures against U.S. diplomats in the country, ordering them to notify the Foreign Ministry before meeting with local officials. Foreign ministry spokeswoman Hua Chunying said China had notified the U.S. embassy of the new measures on Wednesday, which she said were a “countermeasure” to Washington’s decision in […]

The United States has urged Yemen’s Huthi rebels to drop charges targeting the Baha’i community, which said that 24 believers of the faith will face a new trial session Tuesday. Sam Brownback, the U.S. ambassador-at-large for international religious freedom, voiced concern at reports that a court in Yemen’s Huthi-controlled capital Sanaa is again summoning the […]