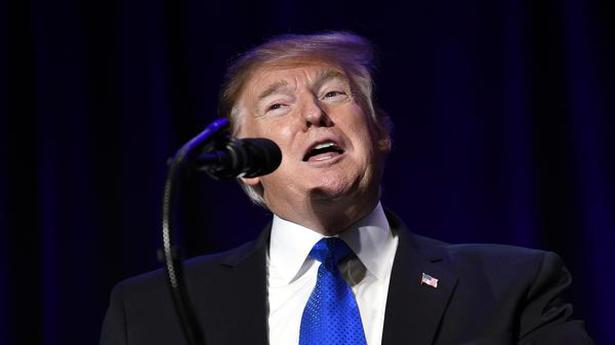 India is a very high-tariff nation, U.S. President Donald Trump alleged on Saturday, stating that he wanted a reciprocal tax or at least some kind of tax.

“India is a very high-tariff nation. They charge us a lot,” Mr. Trump said in his address to the Conservative Political Action Conference (CPAC) in the Maryland suburb of Washington DC.

In his speech that lasted for more than two hours, Mr. Trump touched a wide range of issues including domestic, global and bilateral relationship with countries like India.

Referring to his often-cited example of the iconic Harley-Davidson motorcycles, he said, “When we send a motorcycle to India, it’s a 100% tariff. They charge 100% when India sends a motorcycle to us, we brilliantly charge them nothing.”

“So, I want a reciprocal tax or at least, I want to charge a tax. It’s called the mirror tax, but it’s reciprocal,” Mr. Trump asserted.

Early this year, at a White House event to announce his support for reciprocal tax, Mr. Trump had said he was satisfied with the Indian decision to reduce the import tariff on Harley-Davidson motorcycles from 100% to 50%. “Even this is not enough, this is okay,” he had said.

“Look at motorcycles as an example. (In) India, it was 100%. I got them down to 50%, just by talking for about two minutes. It’s still 50% vs 2.4% (on imported motorcycles to the US). Again, other than that, it’s a very fair deal,” the president had told reporters at the White House on January 24.

On Saturday, he used the Indian example of how other countries were imposing high taxes on American products and now it was time for the U.S. to impose a reciprocal tax. To prove his point, Mr. Trump said, he was using India as an example.

Mr. Trump told his supporters that there was resistance to his move from the Senate.

“I say, fellows, listen, they are charging us a 100%. For the exact same product, I want to charge them 25%. I feel so foolish charging 25, because it should be a hundred. But I’m doing 25 only because of you. I want to get your support,” he said.

Mr. Trump said the U.S. could not allow a country to charge it 100% while it got nothing for the exact same product.

“America is now booming like never before. Other countries are doing very poorly,” Trump said.

The Vatican issuesv a long-awaited manual for bishops and religious superiors on conducting in-house investigations into allegations of priests who rape and molest minors and vulnerable adults. Source: thehindu.com Related

Thousands of angry and frustrated Rohingya refugees marked the second anniversary of their exodus from Myanmar into Bangladesh on Sunday by demanding their citizenship and other rights in the country they fled from. The event came days after Bangladesh with the help of the U.N. refugee agency attempted to start the repatriation of 3,450 Rohingya […]

Rouhani asks West to stay out of Gulf