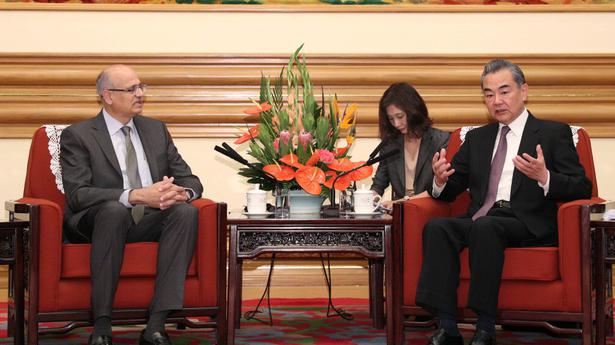 India on Monday signaled its urgency to resolve differences with China on listing Masood Azhar as a global terrorist, to substantiate the “Wuhan spirit,” emerging from last year’s informal summit between Prime Minister Narendra Modi and President Xi Jinping in the central China city.

In his opening remarks during “bilateral consultations,” visiting foreign secretary Vijay Gokhale who arrived in Beijing on April 21 said that India and China should remain “sensitive to each other’s concerns”.

During talks with Chinese State Councillor and Foreign Minister Wang Yi, Mr. Gokhale stressed that India “will work together with the Chinese side to deepen mutual understanding, strengthen mutual trust to implement the decisions taken by our leaders and do it in a manner where we are sensitive to each other’s concerns”.

Analysts say that despite the “re-rest” achieved in ties during the Wuhan informal summit, the two countries have so far sharply diverged on designating Masood Azhar as a global terrorist.

Azhar’s designation was highlighted across the globe when China placed a “technical hold” on listing the head of the Jaish-e-Mohammed (JeM) as a global terrorist following the February 14 Pulwama terror attack in which 40 CRPF personnel were killed.

But there are signs that China is reviewing its position on Azhar’s designation, by also keeping Islamabad on board. Last week, the Chinese foreign ministry said that the Azhar issue “is moving towards the direction of settlement,” in the 1267 committee of the Security Council. Since April 1, China has been saying that a consensus was emerging within the 1267 committee on designating Azhar, after rejecting a parallel initiative by the United States, backed by Britain and France, to seek a ban on him through a separate resolution in the Security Council plenary.

During Monday’s talks, India appeared not to endorse China’s position that Azhar’s designation should only be confined to the 1267 committee. In New Delhi, in response to a query on Mr. Gokhale’s discussion on listing Azhar in the 1267 committee, the spokesperson of the Ministry of External Affairs said that India will continue to pursue “all available avenues” to ensure that terrorist leaders involved in heinous attacks on Indian citizens are brought to justice.

“It is now for the 1267 Sanctions committee and other authorised bodies of the UN to take a decision on the listing of Masood Azhar,” the spokesperson said. He added that India had shared with China, “all evidences of terrorist activities of the Jaish-e-Mohammed and its leader Masood Azhar”.

Pakistan, on its part, has so far been linking the Pulwama strike, for which the JeM has taken responsibility with the human rights situation in Jammu and Kashmir. “This [situation in J&K] is a concern because that leads to a reaction, and that reaction at times creates tension in the region, which must be avoided,” Pakistan foreign minister Shah Mehmood Qureshi said at a Beijing press conference on March 19.

Analysts say that the timing of Azhar’s designation is crucial, as China is disinclined to make an early announcement which would embarrass Pakistan President Imran Khan, who will be arriving in the Chinese capital to participate in the Belt and Road Forum later this week. There is also a view that announcement on designating Azhar should not take place before Indian elections conclude, so that China can avoid the charge that it is interfering in India’s domestic affairs.

Earlier Chinese officials told The Hindu that Indian and Chinese delegations have been interacting at the U.N. headquarters in New York on the Azhar issue. Chinese officials had conveyed to their Indian counterparts their fears that in case the JeM head is proscribed, India will seek labeling of Pakistan as a state sponsor of terrorism, which Beijing roundly rejects.

“It is one year since our leaders met in Wuhan and my colleague and Vice (foreign) Minister Kong Xuanyou have been following up on efforts to see that we implement many of the understandings reached in that meeting,” Mr. Gokhale said.

Pointing to the momentum generated in India-China ties following the Wuhan event, the foreign secretary said that last year “we (India and
China) had very brisk political exchanges,” which included Mr. Wang’s visit to India for the first high level meeting for people- to -people exchanges, which will be followed by a similar undertaking in China later this year.

In his brief observations open to the media, Mr. Wang stressed that as neighbours, China and India must step up their “strategic communication” to shape the global agenda, on account of their status as “emerging markets” and “strategic partners”.

In view of the big picture, China has been underplaying its differences with India on the Belt and Road Initiative (BRI), its pan-Eurasian connectivity initiative. Last week, briefing media on the upcoming Belt and Road Forum (BRF), where India is  not sending an official delegation, Mr. Wang was emphatic that ties between India and China were insulated from their differences on BRI.

The Chinese state councilor had also pointed out that India and China were limiting the threshold of their differences so that overall development of ties remained unhampered.

With only a few days remaining for the campaigning, candidates and political parties are leaving no stone unturned to reach out to the voters and woo them in various constituencies in and around the city. With the major parties, the TDP and the YSRCP finally releasing their manifestos, the candidates are trying to take forward […]

Trump to stream on Twitch

U.S. President Donald Trump who uses Twitter for many policy announcements, has now also joined Twitch, owned by Amazon, as he goes on the campaign trail for re-election. Mr. Trump on Thursday opened his account on Twitch just before a campaign rally in Minneapolis, which then streamed live. Twitch, which has gained a following for […]

Search for Puthumala landslip victims to be wound up

A meeting of people representatives, officials of various departments, and kin of those who had gone missing in the Puthumala landslip on Friday decided to wind up the search operations for the missing persons. Six families were satisfied with the efforts taken by the district administration so far and agreed to conclude further search, Wanayad […]