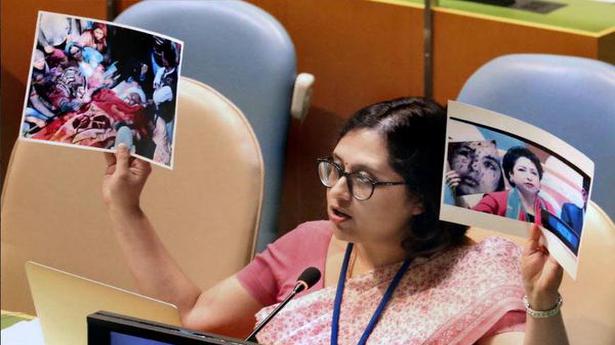 India has lashed out at Pakistan for “weaponising” women’s rights issues for self-serving political gains in Jammu and Kashmir, saying it is ironical that a country where violations of women’s right to life in the name of ‘honour’ go unpunished is making “baseless” statements about it in India.

First Secretary in India’s Permanent Mission to the UN Paulomi Tripathi during the UN General Assembly Third Committee session on ‘Advancement of Women’ on Monday asserted that from the first woman President of the General Assembly Vijaya Lakshmi Pandit to women scientists at the Indian Space Research Organisation, Indian women from have long served as inspiration for many.

“As we renew our collective resolve to continue to work towards the realisation of women’s empowerment and gender equality, there is no space for weaponising women’s rights issues through empty rhetoric for self-serving political gains. Today, one delegation has callously chosen to politicise this agenda by making unwarranted references to internal matters of my country,” she said at the Committee.

The Committee is one of the six in the UN General Assembly, deals with social, humanitarian affairs and human rights issues.

Ms. Tripathi did not directly name Pakistan, but was responding to references made to Jammu and Kashmir by Islamabad’s outgoing envoy to the UN Maleeha Lodhi, who in her speech at the Committee earlier said the women in Jammu and Kashmir were suffering due to the communication blackout in the state.

Ms. Lodhi had alluded to a picture of a Kashmiri mother that appeared on the front page of The New York Times along with an article about how the mother lost her son, who was bitten by a snake, as she could not get medical help on time.

Without naming Pakistan, Ms. Tripathi said that the country covets the territory of others and camouflages its “vile intentions with fake concerns”.

“It is ironical that a country, where violations of women’s right to life in the name of so called ‘honour’ go unpunished, is making baseless statements about women’s rights in my country,” she said.

Ms. Tripathi said the international community still remembered that the “armed forces of this country” perpetrated dreadful sexual violence against women with impunity, in India’s immediate neighbourhood in 1971.

“We still hear accounts of these gruesome violations at the annual high level general debate. We do not wish to engage further on this issue with a delegation with such credibility,” Ms. Tripathi said, stressing that the precious time of the UNGA Committee be better utilised to deliberate on the agenda before it.

She said that despite significant progress made towards gender equality, women and girls around the world continue to face restrictions to access education, employment and political participation.

Women are still married as children, trafficked into forced labour and sex slavery and every day more than 800 women die from preventable causes related to pregnancy and childbirth, Ms. Tripathi said.

She told the session that gender equality and empowerment of women were an integral part of India’s inclusive development strategy and New Delhi attaches utmost importance to representation of women in decision making positions.

More than 1.3 million elected women representatives lead in formulation and implementation of public policies at grassroots level in India and measures such as financial inclusion, income guarantee programmes, cash benefit transfers, improved access to healthcare and education for women and girls have improved lives of millions, she said.

More than 197 million women, who previously did not qualify to open bank accounts, now have bank accounts through government’s financial inclusion initiative, she added.

Highlighting other initiatives taken by the Indian government to ensure women empowerment and equality, Ms. Tripathi said ‘Stand Up India’ and ‘Mudra Yojana’ programmes promote women entrepreneurship by providing access to loans and cooking gas connections have been ensured to more than 80 million women leading to positive impact on their health, and reduced environmental degradation from using firewood.

With a view to consolidating women farmers’ role, 30 per cent of the budget allocations are earmarked for women in all ongoing programmes in this sector and engagements with the community health workers enable women to take informed decisions about their reproductive health and access safe contraception, she said.

Leaders urge the world to unite in fight against virus Source: thehindu.com Related

Google is celebrating the 166th birth anniversary of microbiologist Hans Christian Joachim Gram with a doodle. Gram was born on September 13, 1853, in Denmark’s Copenhagen. Gram is best known for pioneering the method of the Gram stain to identify bacteria. The Danish microbiologist earned an M.D. from the University of Copenhagen in 1878. He […]

Cambodia to free more than 70 opposition activists on bail

Cambodian Prime Minister Hun Sen has ordered the release on bail of more than 70 opposition activists arrested in recent weeks and accused of plotting to overthrow the government, he said on Thursday. Mr. Hun Sen, who has ruled Cambodia for more than 34 years, has been under increasing international pressure to improve his human […]