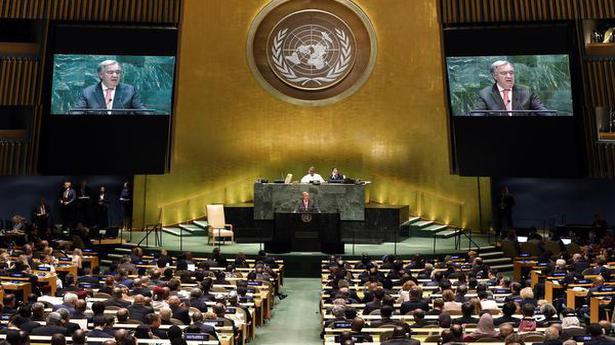 India has voiced concern over the UN’s inability to pay reimbursements for peacekeeping operations conducted by the country and other Troop Contributing Countries and said that the Secretary-General contributed to a “false sense” of financial soundness by using closed peacekeeping funds to pay staff salaries.

The UN is facing a “severe liquidity crisis”, reaching its deepest deficit of the decade and will not have enough cash by next month to cover payrolls.

Several emergency measures have been put in place by the world organization to tide over the financial crunch.

India is among the 35 UN member states who paid their regular budget dues in full and on time to the world organisation as at October 11, 2019. India paid $23.25 million in regular budget assessments by January 31, 2019, the 30-day due period specified as per the UN’s Financial Regulation rules.

While it paid its dues on time, India voiced concern that the UN is yet to pay it and other Troop Contributing Countries (TCCs) reimbursements for peacekeeping operations.

“India, though a developing country, has not only settled all of its dues on time, but has also made part payment for future assessments, both for the regular and peacekeeping budgets,” India’s Deputy Permanent Representative to the UN, Ambassador K. Nagaraj Naidu said Friday.

“This is not easy considering the scale of our developmental needs. It would not be remiss that our assessment rates have also been growing, an increase of 13% in the latest update,” Mr. Naidu said.

Speaking at the General Assembly Fifth Committee (administrative and budgetary matters) main session on ‘Improving the Financial Situation of the United Nations’, Mr. Naidu said 27 TCCs, 17 from the Group of 77, including India, are still awaiting their legitimate reimbursements from the closed peacekeeping missions.

“Our expectation is that the problem be discussed and addressed comprehensively. We cannot indefinitely delay dues to the TCCs, while using the same funds to pay others,” he said.

The UN owed India $38 million, among the highest it has to pay to any country, for peacekeeping operations as of March 2019.

Mr. Naidu pointed out that Secretary-General Antonio Guterres has again used closed peacekeeping funds, meant to reimburse the TCCs, to pay the salaries of staff thereby contributing to a false sense of financial soundness.

“Here, we would like to remind the Secretary-General that his obligations to the TCCs are equally important as advocating to member states to meet their financial obligations,” Mr. Naidu said.

Only 131 members states have settled their regular budget assessments for the current year. While 63 member states owe $894 million for the current year, a total of 41 countries are yet to settle their dues from the previous years, which cumulatively stands at $310 million.

Referring to the austerity measures announced by the Secretary-General last week in the wake of the financial crisis, Mr. Naidu said the measures nudge nations to judiciously use resources but also pose fundamental questions on the raison d’etre of the United Nations.

“The global community still looks at the UN for development, hope and peace. Therefore, we must all recognise the crisis and become part of the solution,” he said.

He noted that while reforms in the peacekeeping budget, like the cash pool and annual assessments, have mitigated to some extent the impact of the liquidity crisis, the underlying problem persists.

Out of an approved budget of $6.5 billion, $3.3 billion is still outstanding and this does not include the $400 million that remains outstanding for decades for the closed peacekeeping missions.

Mr. Naidu said borrowings from the Working Capital Fund, the Special Account and the closed peacekeeping accounts does not seem to have filled the liquidity gap.

He said among the list of austerity measures that could perhaps improve the budgetary situation includes adhering to the advance air ticket purchase policy, better management of exchange rate fluctuations, energy efficient lighting and other environment friendly practices at the UN headquarters and duty stations.

“The Gandhi Solar Park, a token gift of India to the UN, which was inaugurated last month, is part of the solution,” he said referring to the park with 193 solar panels installed on the roof of the UN building that Prime Minister Narendra Modi inaugurated last month during the high-level UN General Assembly session.

India said a sustainable solution to deal with the financial crisis would emerge only when member states begin to honour their budgetary obligations in full and on time. “Paying on time and in full is not just the easy solution, but the desired one,” Mr. Naidu said.

Chhattisgarh workers not allowed to rest on long journey home

A group of 42 brick-makers, including women and children, battle stigma and a scorching sun as they walk back from Odisha Source: thehindu.com Related

Tamil Nadu has retained the third rank in the Sustainable Development Goals (SDG) India Index 2019, released by NITI Aayog on Monday. The State’s overall score this year is 67, up from 66 in 2018. This time, T.N. will share the third spot with Andhra Pradesh and Telangana. The State saw major improvement in its […]