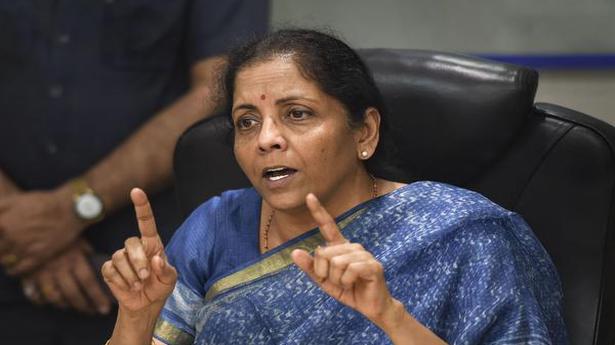 Union Finance Minister Nirmala Sitharaman on Sunday said negotiations between India and the United States on a trade deal are going on in “full speed” and expressed hope that it will conclude soon.

The ongoing trade deal negotiations briefly came up for discussion during a pull aside between Ms. Sitharaman and US Treasury Secretary Steven Mnuchin at the IMF headquarters. Mr. Mnuchin is scheduled to visit India early next month.

“In fact, I broadly mentioned it to Secretary Mnuchin, but that is something on which the Commerce minister and Mr (Robert) Lighthizer (US Trade Representatives) are working. My inputs are that the negotiations are going in full speed and there’s a great intensity with which both sides are engaging and hopefully the deal will be structured soon,” Ms. Sitharaman said.

Responding to a question, she said a totalisation agreement with the US has always been on the cards.

“One of the reasons why that was never responded to was that India did not have a social welfare net or social insurance cover for Indians in India. And therefore, if they had to give it, they wouldn’t be given in the sense where would it be used? she said.

“Today, I think most private insurances or for many of the families which are below the certain level of income, Ayushman Bharat is a fantastic big coverage. There is also now a lot more private sector option for insurance coverage. So whether that has been factored in now in the negotiations on this particular thing, I’m not adequately informed,” Ms. Sitharaman said.

She said India in the past even, when she was the Commerce minister, had put several arguments before but that was repeatedly stonewalled over the health cover issue.

“I remember that. I’ve heard it at least twice in my negotiations on the totalisation,” Ms. Sitharaman said. It could be “humongous amounts”, she added.

Most of the Indians working in the U.S. unfortunately have no claim over their social security deductions, because there is a minimum period of at least 10 years, she said.

“It’s so designed that you really can’t benefit. And no one in any case does live for that duration in this country,” she said

The two sides agreed to continue the dialogue in the first week of November during Mr. Mnuchin’s visit to New Delhi, it said.

The head of the U.S. House Judiciary Committee said on Sunday the panel would seek documents from more than 60 people and entities as part of a probe into possible obstruction of justice and abuse of power by President Donald Trump. Committee Chairman Jerrold Nadler told ABC’s “This Week” the panel wanted to get documents […]

Diplomacy Pak style: When Pakistan’s UN envoy thrashed US girlfriend, got off on diplomatic immunity

The Pakistan government has removed Maleeha Lodhi and appointed Munir Akram as its permanent representative to the United Nations. He was once dismissed from the post by former Pakistan president Asif Ali Zardari over a disagreement, however, he is also known for a controversy in 2002 when he was accused of domestic violence by his […]

Britain and Germany on Tuesday urged the international community to forge a “collective response” to the drone attacks on Saudi Arabia’s oil installations, which U.S. officials have blamed on Iran. British Prime Minister Boris Johnson and German Chancellor Angela Merkel discussed the attacks during a telephone conversation, agreeing on “the need to work together, alongside […]