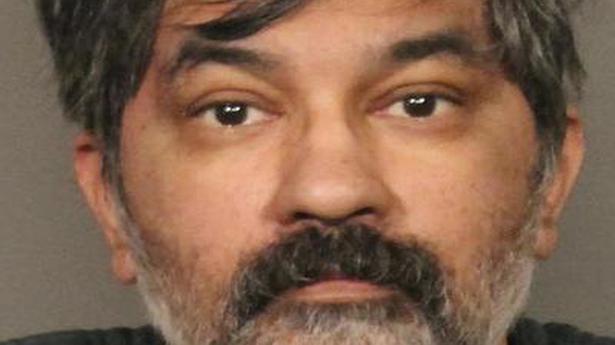 A 53-year-old Indian-origin IT professional has been arrested after he dramatically walked into a Northern California police station along with a dead body in his car and confessed to have killed three others at his apartment, over 350 km away, according to U.S. media reports.

All four victims in the incident are related to the suspect, Shankar Nagappa Hangud, Roseville Police Department Captain Joshua Simon said on Tuesday.

Simon declined to name the four victims, but said they were all members of the suspect’s family, two adults and two juveniles.

Hangud, driving a red Mazda6, arrived at the police station in the city of Mount Shasta shortly after noon and told officers that he had killed people at his apartment in the Placer County city of Roseville, police said.

Simon said that Hangud, a Roseville resident, was in custody at the South Placer Jail after city detectives brought him back from Siskiyou County on Monday night and would face four charges of murder.

Hangud was a data specialist and had worked for several companies in the Sacramento area, according to his LinkedIn profile.

Hangud, who is being held without bail, refused any interviews, The Sacramento Bee newspaper reported.

“This incident has touched the lives of many in the area,” Simon told reporters at a news conference on Tuesday, adding that such a killing had not occurred in the Placer County city of 1,30,000 in his recent memory.

“The suspect himself drove to the Mount Shasta Police Department with one of the victims in his car and made a confession to them to start off this investigation,” Simon said.

Mt. Shasta Police chief Parish Cross said he and another officer went outside to the car to verify what Hangud had said was true.

“These are things that just don’t happen everyday and when they do it is upsetting,” said Cross.

“I’ve been in the business a long time and I’ve seen a lot of unusual occurrences, just upsetting occurrences, but this one here is a whole new level. We are still in shock,” KDRV.com, an affiliate of the ABC Television Network, reported.

Hangud told police the address where to find the three other bodies and Roseville officers checked his apartment near Sacramento and discovered the additional victims, according to authorities, the NBC News reported.

“It appears that the victims were killed by this suspect over a few days time span,” Simon said. “We’re still working to put that timeline together.”

Hangud, who has been taken back to Placer County and booked into jail, was the sole suspect in the killings and there appeared to be no ongoing threat, police said.

Investigators are asking anyone between Roseville and Mt. Shasta if they have seen Hangud and an adult man of Indian descent in the suspect’s car, the report said.

Police said they were not ready to disclose a motive for Hangud’s alleged acts; however, tax records showed that Hangud faced a federal tax lien of $178,603 from the Internal Revenue Service this year.

Police believe Hangud “drove from Roseville and travelled to unknown places in Northern California, and ended up in Mount Shasta,” Simon said.

His most recent employment was with a company called Social Interest Solutions, which provides IT services for state public assistance programs. The company, located at 1 Capitol Mall and operated by Oakland-based Alluma, declined to comment, but public records showed his employment there ended in 2018.

Court records show that Hangud’s only previous encounter with law enforcement was for speeding in Placer County in 2016 in 2001. Before 2015, Hangud worked in the technology sector in the Bay Area and had previously lived in Dallas, Texas; Maryland; and New Jersey, according to public documents.

Police said disclosure of the victims’ identities was pending until next of kin are notified.

Australia says all WHO members should support a proposed coronavirus inquiry

All member nations of the World Health Organization (WHO) should support a proposed independent review into the coronavirus pandemic, Australia’s Prime Minister Scott Morrison said on Thursday, further threatening strained ties with China. Australia has become as one of Beijing’s most forceful critics over the handling of the spread of the coronavirus, with Mr. Morrison […]

A district in the Czech capital, Prague, went on Friday ahead with a plan to remove the statue of a Soviet Second World War commander. The Russian Embassy in Prague condemned the move, saying it sent a protest note to the Czech Foreign Ministry about the “demolition.” General Ivan Stepanovic Konev led the Red Army […]