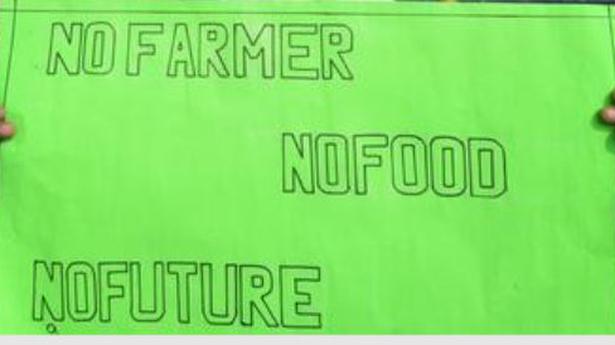 “Farmers are the soul of any nation. We must protect our soul.”

Hundreds of Indian-Americans have held peaceful protest rallies in several cities across the U.S. in support of the Indian farmers who have been protesting against the new agricultural reforms in India.

A large car caravan of protesters from various parts of California blocked the traffic on the Bay Bridge on Saturday as they moved towards the Indian Consulate in San Francisco, while several hundreds gathered in downtown Indianapolis.

The protesters at both the places demanded the new laws be repealed, saying they would push Indian farmers towards poverty and give the corporate sectors a monopoly.

“Farmers are the soul of any nation. We must protect our soul. People around the world, including many cities in the U.S. and Canada, have come together to dispose of the bills that will open India’s agricultural market to the private sector; allowing major corporations to take over independent farming communities and dilute crops’ market value,” said Indiana-based Gurinder Singh Khalsa.

Khalsa was one of the organisers of the rally in downtown Indianapolis attended by nearly 500 Indian-Americans from various parts of Indiana.

Explainer | Why are the Agriculture Bills being opposed

Thousands of farmers are protesting on various borders of Delhi since November 26, seeking repeal of three farm laws enacted in September.

A day earlier, there was a gathering of Indian-Americans in Chicago and a protest rally in front of the Indian Embassy in Washington DC. Another one is planned on Sunday.

“No Farmers, No Food” and “Save the farmers” were the commonly-sighted posters at these peaceful protest rallies.

“This is a peaceful protest and should serve as a loud and clear message to the Indian government. We must support our farmers,” said Amandeep Singh Hundal in Indian.

“This is not a request to Indian government, rather a demand to take all three bills back,” said another Sikh leader Darshan Singh Darar.

The protest in Bay Area was organised by the Jakara Movement, a California-based grassroots organisation which seeks to strengthen community engagement and build empowerment by focusing on issues of civic engagement, education, health, and social justice.

Organisers said the caravan protest taking place on Sunday in the Bay Area – along with similar recent protests in New York, Houston, Michigan, Chicago, and Washington, DC – was meant as a show of solidarity, as Sikhs around the world urge international condemnation of the farm bills.

“Without farmers, there is no food. Without farming, there is no livelihood for the millions of people in Punjab who have relied on farming as a source of income for generations.”

“These issues are deeply intertwined, and we will raise our voices to ensure that the families from Punjab who are putting their lives on the line to protest in Delhi can do so without facing threats from the Indian government,” said Naindeep Singh, executive director of the Jakara Movement.

Thousands of farmers from Punjab, Haryana and several other states have been protesting for the last eleven days at the borders of Delhi against three farm laws.

Watch | Why are the agriculture bills being opposed?

Dubbing these laws as “anti-farmer”, these farmers claim that the newly enacted legislations would pave the way for the dismantling of the minimum support price system, leaving them at the “mercy” of big corporations.

However, the government has maintained that the new laws will bring farmers better opportunities and usher in new technologies in agriculture.

He is among a list of former Trump associates who have found themselves under indictment or in jail, including his former campaign chair, Paul Manafort, his longtime lawyer, Michael Cohen, and his former national security adviser, Michael Flynn. Source: thehindu.com Related

Victory for US diplomacy: Mike Pompeo on Masood Azhar’s listing as global terrorist

The designation of Pakistan-based JeM chief Masood Azhar as a global terrorist by the UN demonstrates the international commitment to rooting out terrorism in Pakistan and bringing security and stability to South Asia, the White House has said. The UN sanctions committee on the Islamic State and Al-Qaeda on Wednesday announced the designation of Azhar, […]

The Philippines’ Bureau of Immigration will temporarily stop issuing tourist visas on arrival to Chinese nationals to help ensure the country remained free of the new coronavirus, its head said on Tuesday. “We are taking this proactive measure to slow down travel, and possibly help prevent the entry of the 2019-nCov,” Jaime Morente, the bureau’s […]